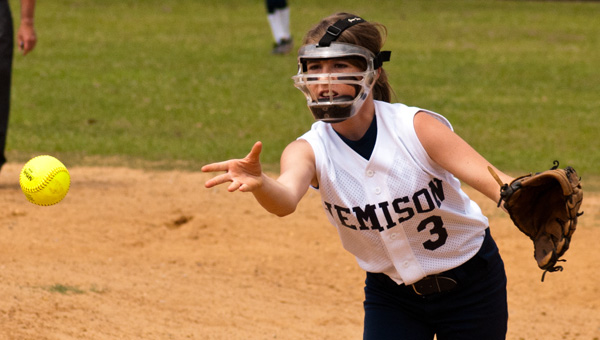 Making the play: Jemison second baseman Wendy Spiginer flips the softball to first base for an out during Tuesday’s game against Thorsby.

Tuesday’s softball game between Jemison and Thorsby was delayed about 30 minutes as the pitcher’s rubber came loose and a new one had to be found and installed.

The pitchers—Jemison’s Tiffany Guin and Thorsby’s Taylor McManus—seemed to like the altered mound just fine.

In a 4-2 Jemison win, Guin and McManus combined to strike out 15 batters and stifle the opposing offenses until visiting JHS struck for three runs in the top of the sixth inning.

Emily Patterson doubled with one out in the frame, and then Morgan Lucas took a walk and Lauren Crosby reached base on an error that also allowed Patterson to score.

Shelby Griffin then came through with a clutch hit to make the score 4-1.

Jemison had scored its first run of the game off McManus just one inning earlier, when Hannah Smith looped a fly ball in between Thorsby’s third baseman and left fielder to score Griffin.

Thorsby struck first, in the bottom of the second inning.

Josie Adams singled to lead off the frame and scored later on a groundout by Savannah Bice.

The Rebels were quiet the rest of the game until their last at-bat.

In the bottom of the seventh inning, Bice, Destiny Davis and McManus loaded the bases with one out.

Guin recorded her 11th strikeout of the game before Halie McKinnon kept Thorsby’s hopes alive with a run-scoring hit, but Guin’s 12th punchout ended the game.

The bats came alive for the Thorsby Rebels softball team, as they took a 7-4 victory over Billingsley and a... read more