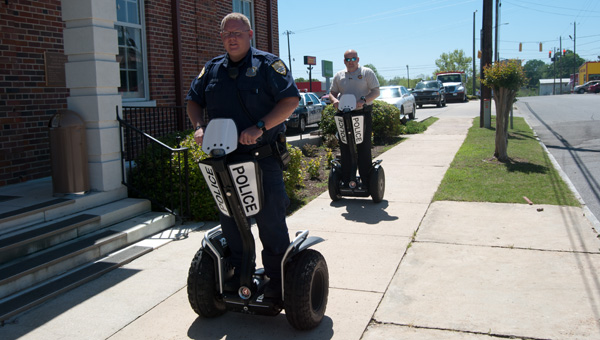 The past couple of weeks, residents may have seen local law enforcement officers gliding down sidewalks and through parking lots on futuristic looking vehicles.

When it comes to protecting people, local agencies use any means available, and a new resource is personal transporters developed by Segway.

Clanton Police Department and the Chilton County Sheriff’s Department have had Segways—vehicles with two wheels, a platform in between to stand on, and handlebars—this week and last week as part of a law enforcement trial program.

“We had been discussing the need for something similar, and then this opportunity came along, so we just decided to see what it was all about,” Clanton Police Capt. David Clackley said.

Officers planning to use the machines went through training.

They’ll have to give the Segways back after Friday, but officials could decide to purchase one of the vehicles to become a part of the departments’ arsenal for fighting crime.

Segways have many features that make them useful for law enforcement.

The vehicles move as fast as 12-13 miles an hour, as fast as a person could sprint, and as slow as a crawl.

When using Segways instead of patrolling in a car, gas savings would be significant—as would the decrease in the amount of emissions.

The Segway is electronic; it would be charged in between uses, and one charge lasts about 12 hours.

Basically the machine provides officers the awareness of their surroundings that walking would, but provides speed and conserves energy as would a patrol car.

Segways are even more versatile than, say, an all-terrain vehicle, because the Segway can maneuver into tighter areas with a zero-turn radius and pass through gates with ease.

Also, the vehicles add about half a foot onto an officer’s height, allowing him a better vantage point in a crowd.

Clackley said officers have gotten quizzical looks as they drove the two-wheeled vehicles around town.

“Kids love them,” he said. “Some folks think they’re a little goofy, and I was in that crowd. I said I would never get on one of these until I tried it out.”

The vehicles would be useful for patrol in downtown Clanton, neighborhoods, in crowded parking lots, around parks, in parades and around schools.

“We feel like we could definitely get some use out of them,” Clackley said. “It would just be up to [Chief Brian Stilwell] and the city council, based on how much they would cost and whether it would be worth it.”

Retail Segways cost from $5,000 to $10,000. Those designed specifically for police use could probably be obtained at a discounted rate.

Senior safety Zac Etheridge overcame a neck injury to tie for the team lead in interceptions as Auburn won the... read more