Panthers tune up for crucial game 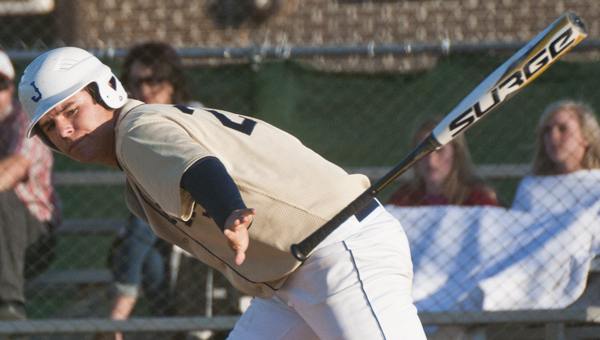 Bats away: Jemison’s Kyle Dennis, above, tosses his bat toward the dugout after taking a walk during Tuesday’s game.

Jemison split a baseball doubleheader against Shelby County on Tuesday, tuning up for its most important game of the season.

The Panthers lost to SCHS, 8-4, in Game 1 Tuesday and won the nightcap, 11-0, in five innings, but Jemison’s playoff fate will come down to a game Thursday at region foe Dallas County.

JHS defeated DCHS, 2-1, on March 25. Another win over the Hornets would give Jemison second place in the area, behind Bibb County.

A loss at Dallas County would mean the second spot in the area (the top two teams in each area make the playoffs) would be decided by a tiebreaker.

The Panthers (19-9) showed resiliency Tuesday in fighting back from a 5-0 deficit in the fifth inning.

SCHS scored two runs in the top of the first inning and three runs in the fourth; Jemison, meanwhile, had managed just two hits against Dakota Falkner.

Zak Kaylor (the JHS starting pitcher) and Cruz Martinez earned back-to-back walks with one out in the fifth, though, and James Smith and Jacob Bass recorded back-to-back run scoring singles with two outs.

A pitching change was made, but Smith scored Jemison’s fourth run of the frame when the new hurler’s first pitch got away from the Shelby catcher.

The Wildcats (6-10) responded with three runs in the top of the sixth to increase their lead to 8-4.

Jemison loaded the bases in the seventh but could push no runs across the plate.

Bass had Jemison’s best day at the plate, going 3-for-4 with a run batted in.

The game Thursday will begin at 6 p.m. at Plantersville.