Stacy Singleton, daughter of Jemison Councilman Samuel Reed, and her children returned home to Chilton County in late March, having fled Japan following the March 11 earthquake and subsequent tsunami and nuclear disaster that devastated the country.

Singleton, her husband Harold Singleton Jr., and their two children, Endya, 10, and Harold III, 9, first moved to Yokosuka, Japan in April 2010, where her husband is stationed with the U.S. Navy.

“We felt the earthquake (and aftershocks) up until the day we left, but we were stationed too far south to be affected by the tsunami,” said Singleton. “We were concerned with the nuclear radiation because we were told that we were 180 miles from one of the radiation plants.”

The family left under the conditions of voluntary evacuation and began their journey, a 12-hour flight from Japan back to Alabama, on March 24. They arrived at the Birmingham–Shuttlesworth International Airport on March 25. 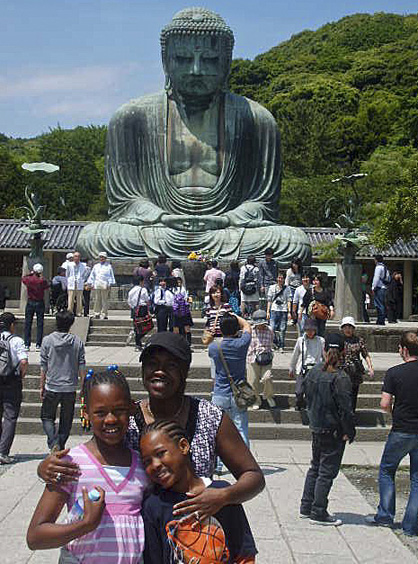 Stacy Singleton with her daughter Endya, 10, and son Harold III, 9, in front of a Buddha statue while stationed in Yokosuka Japan.

“It was a long process, but we made it back,” said Singleton. “We will not go back until they stop it (nuclear radiation), but a lot of families have decided to stay in Japan.”

Her husband is still currently aboard the USS Mustin (DDG 89) in Japan, fulfilling his duties as Fire Controlman First Class .

“I speak with my husband every day just about,” said Singleton. “If not every day, then definitely by email. He is fine, and the ship is fine.”

The family was supposed to stay in Japan until April 2013.

“I want to go back if I can — if we’re allowed to,” said Singleton. “It was a nice place to live, and we enjoyed it.”