Heritage Day gets bigger and better 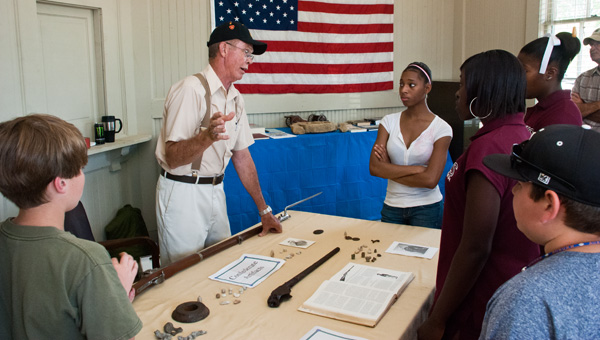 Seemingly every aspect of Maplesville’s second Heritage Day celebration was bigger and better than the year before.

Fifty-eight vendors lined the streets of Maplesville as the town’s history was remembered, compared to 26 last year.

Also, one of the more popular attractions of the event—tours of historic structures around town—featured eight stops compared to six the year before.

Town Clerk Sheila Haigler, who helps organize Heritage Day, said she thinks officials did a better job of promoting the event this year.

“And, too, I think everybody is always skeptical the first time you do something,” Haigler said. “But they saw how well it went off last year. That makes a big difference.”

“The ones I talked to said they had a very good turnout in their homes,” Haigler said.

The depot served as the centerpiece of the festival.

It houses a pictorial museum—one that increased in size in anticipation of the festival—of the town’s history.

Also at the depot was a discussion of a Civil War raid, complete with artifacts, and its impact on the town. And an informative DVD about the town’s history was shown continuously throughout the day.

“That went over well, and we would like to expand that in the future,” Haigler said.

Haigler encouraged anyone with ideas about how to improve Heritage Day to contact her at town hall (334-366-4211).

Haigler said the event will be held on the second Saturday of April every year.

“I’ve had nothing but good comments,” she said. “People enjoyed the day. It was hot, but we can’t control that.”