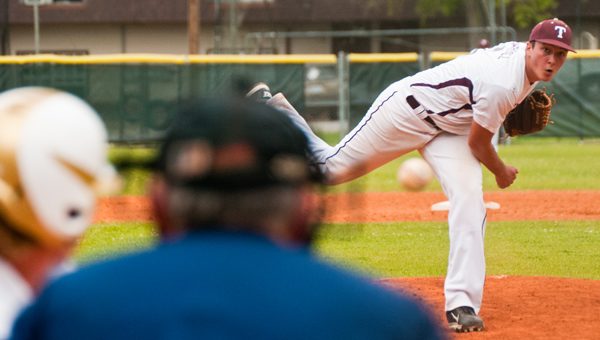 Thorsby’s Cody Carroll is one of the best pitchers in the state’s 2A classification, and he had extra motivation in Friday’s game against Isabella.

The result: Carroll pitched the first perfect game—no hits or walks allowed—of his varsity career as the fourth-ranked Rebels clinched their third consecutive area championship with a 16-0, five-inning win.

Coach Ab Argent said he could tell before the game began that Carroll, who played pre-varsity baseball at Isabella, was focused and had his best stuff.

Still, Argent said it’s a rarity for a pitcher to toss a perfect game, especially against area competition.

“He’s the type of pitcher that gets stronger as the game goes on,” Argent said. “It takes him awhile to get loose. But it was Isabella, and he wanted the ball.”

Carroll struck out nine of the 15 batters he faced.

Only two Isabella hitters, Andrew Smith and Trey Calfee, got the ball out of the infield. Both lifted fly balls to right fielder Jace Maddox in the third inning.

Thorsby (24-5), meanwhile, scored early and often, putting up two runs in the bottom of the first inning, nine runs in the second and three in the third.

Carroll also went 2-for-3 at the plate with three runs batted in and two runs scored.

Matt Morgan, Maddox and Blake Elkins also each had a double.

THS clinches its area championship with the win. The Rebels will host the first round of the state playoffs on April 22-23.

Swing away: Chilton County’s Holly Watts swings at a pitch during Thursday’s game against Thorsby. Watts scored one run and... read more