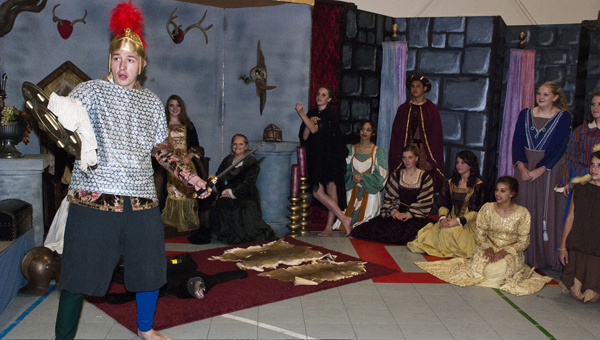 Ryan Kirkland, who plays the character of Nick Bottom in Chilton Christian Academy’s upcoming production of “A Midsummer Night’s Dream,” realized how much he has been living in Shakespeare’s world the last few weeks when he caught himself using archaic English in everyday conversations.

“For the past month and a half, I’ve been really studying — it really sticks with you,” said Kirkland. “I mean, why did I just say, ‘methinks,’ (in that sentence)?”

The play, which will be performed for one night only Friday, April 15, involves every student at CCA from middle school through high school. All 46 students at the private school have a part in the play — from the actors on the stage to the production crew and those responsible for lights, costumes, scenery and more.

“There are no adults running any portion of the show,” said English teacher Charlotte Johnson, who is directing the play. “We thought it was important for students to have ownership.”

The school decided to put on “A Midsummer Night’s Dream” after studying Shakespeare, including “Romeo and Juliet” and “Macbeth.” While those latter two are tragedies — where to quote Johnson, “everyone dies” — the play they chose ranks as one of Shakespeare’s most popular and widely performed comedies.

The play recounts the tale of star-crossed lovers who stumble into a magical forest full of fairies and mischief-makers, along with an unsuspecting company of manual laborers attempting to produce a play of their own.

Shakespeare’s work is the largest production put on at CCA in recent memory.

“This is our first year to do a production of this magnitude,” said Johnson.

Students said they have enjoyed learning about their characters, the language Shakespeare employs and what life was like in the 1700s, when their version of the play is set.

“One of my favorite parts has been researching my character,” said Kirkland, who spent hours on YouTube watching how other actors have portrayed his character, who was given the face of a donkey by the mischievous elf Puck.

While the course of a great play never did run smooth, CCA’s effort has been pretty seamless.

Kirkland said one challenge was learning to act “bad,” given how the play his band of six lower-class workers puts on is crude and horribly acted.

Rebekah Kirkland and Jessica Standifer, who play Helena and Hermia, respectively, said it’s hard to act like you hate someone who is a good friend in real life or be in love with someone you barely know. It’s also tough sometimes to stay in character 100 percent of the time, the two said.

“You have to act in a different way,” said Standifer. 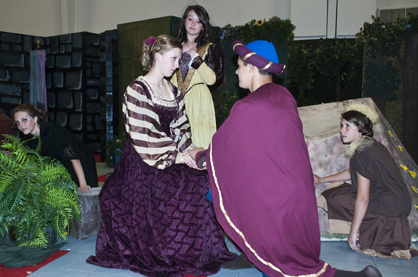 Besides learning more about English and history, Johnson said the production has given a boost to students’ confidence.

“(We’re) convincing people to step out of their comfort zones,” she said. “I tried to get them to do something outside what they normally would do. I definitely wanted them to grow.”

It’s brought the student body closer together too.

Ryan Kirkland, who has played several sports, said the camaraderie and trust between classmates is unlike anything he has seen before.

“This whole thing is a side of teamwork I’ve never seen. You count on everyone else to do their part,” said Kirkland.

The play will last approximately one hour and 20 minutes and includes an intermission. Tickets are available for $5 at the school or from students.

Doors open at 6:30 p.m., while the play starts at 7 p.m. in the school’s campus gymnasium at Victory Baptist Church in Jemison.

Johnson wanted to thank the production crew Alpha Kappa Players and Gerald Parten for their help, particularly with sets and costumes.

Students ‘speak up’ with 4-H