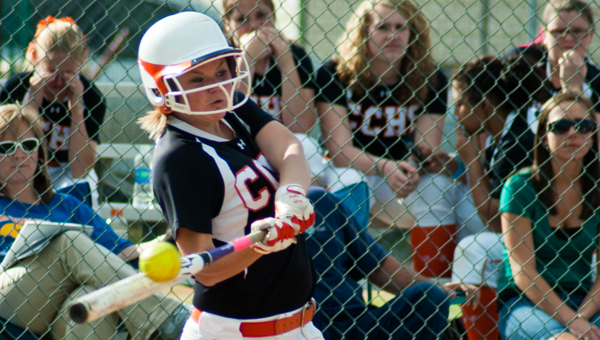 Swing away: Chilton County’s Holly Watts swings at a pitch during Thursday’s game against Thorsby. Watts scored one run and drove in one run in a winning effort.

CCHS is now 18-7 on the season, with all but one of the losses coming in tournaments.

The hosts wasted no time Thursday: the first eight batters in the bottom of the first inning either hit safely or brought home a run with an out.

The score was 5-0 after the first, and the Tigers added two more runs in the second and three more in the third.

Thorsby’s Kelly Nord came in to pitch the fourth inning and held the Tigers scoreless, but the game was still called after five innings because the visiting Rebels could get nothing going against Coker.

Haley Barnett dropped a ball just over the third baseman’s head in the second inning for Thorsby’s only hit of the game.

The only other THS baserunner was Destiny Davis, who drew a walk in the third inning.

The middle of the Chilton batting order did most of the damage.

No. 3 hitter Rachel Johnston went 2-for-2 with a walk, one run batted in and two runs scored.

CCHS will compete in the Panther Classic at Jemison on Saturday, while Thorsby’s next game is at Billingsley on April 11.