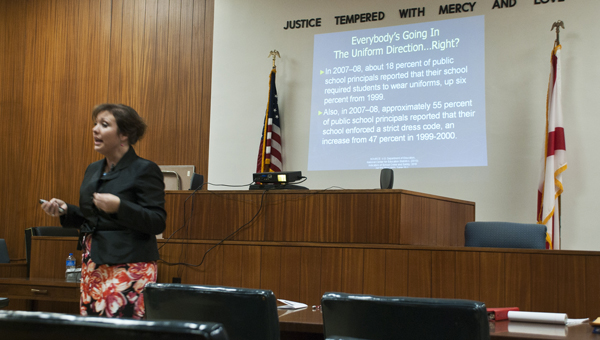 “Which Direction Should We Go” was the title of the presentation Sue Gilliland gave at a public meeting regarding school uniforms Thursday night at the Chilton County Courthouse.

Gilliland, a Verbena schoolteacher and parent, shared her thoughts, research and findings to an attentive and concerned crowd.
“I began researching this policy when I knew this was going to affect my daughter,” said Gilliland.

She expressed that her goal was for everyone — pro-uniform, anti-uniform and neutral — to leave with more knowledge and desire to get involved in Chilton County education.

Gilliland began by showing the audience that the first thing stated in the U.S. Department of Education’s Manual on School Uniforms is to get parents involved from the beginning.

Gilliland also went over the uniform policy the board has in place to vote on in two weeks.

“I haven’t had one thing sent to home about a uniform policy,” said Gilliland. “It’s not your school, it’s not his school or her school, it’s our school and it’s our county.”

Gilliland presented numerous examples of where school uniform policies were unsuccessful, but also presented examples where the uniforms were said to be a success.

Other parents and educators also spoke about their opinions on the topic.

“I would not dare do anything for my children that would cause them any type of stress or harm, and I wouldn’t do it for yours,” said Ricky Porter, Isabella High School Principal. “This should be called a restrictive dress code than uniform. You can make research say whatever you want to say.”

One Maplesville parent said she agrees with the uniform policy and “excuses are things people use when they don’t want to do something.”

Other audience members spoke about how they felt having a uniform policy is a loss of freedom, the children do not like them and how they are too expensive.

“This doesn’t have to be mandatory there are opt-out programs,” said Gilliland. “At this point we do not have an opt-out policy in place for this policy.”

Students ‘speak up’ with 4-H