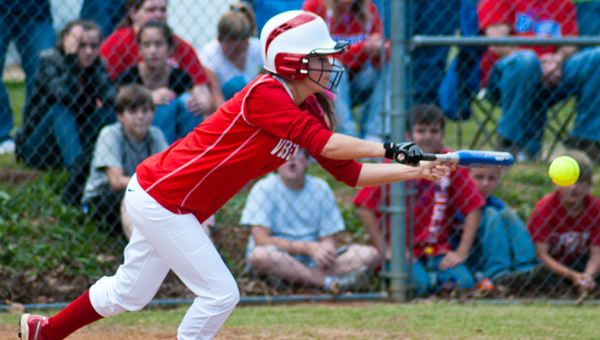 Chanin Hancock didn’t allow a hit for five innings and came up with the biggest hit of the game herself as Verbena softball defeated Isabella, 3-2, on Friday.

The game was a scoreless pitchers’ duel between Hancock and Isabella’s Chelsea Cox—neither team got a runner past first base—until the bottom of the fourth inning.

Verbena’s Lacey Short led off with a bunt single and scored one out later on a double to right field by Victoria Fletcher. Fletcher advanced to third base on a wild pitch, and then scored on a single by Destinee Tyus (the IHS fielder threw the ball home, but Fletcher slid in under the tag by catcher Kaylynn Culp).

Hancock recorded her ninth and final strikeout of the game against Isabella’s first batter of the sixth inning but lost her no-hit bid on a Melony Smith single.

With two outs and runners on second and third, Culp came through with a clutch single to tie the game at 2.

Hancock responded by leading off the bottom half of the inning with a ringing triple to left-center field.

K.K. Freeman entered the game to run for the pitcher and scored what would turn out to be the game-winning run on a groundout by Fletcher.

There was still work to be done, however, as Isabella’s Kacie Adams led off the seventh inning with a base on balls.

Adams advanced to third base on two groundouts but was stranded there to end the game as Hancock induced another grounder, this one to third baseman Allyson Brown, who scooped the ball up and fired to first just in time to preserve the victory.

Hancock allowed two hits and one walk in seven innings, spoiling an impressive performance by Cox, who allowed six hits and no walks in six innings while striking out seven.

No batter for either team recorded multiple hits.