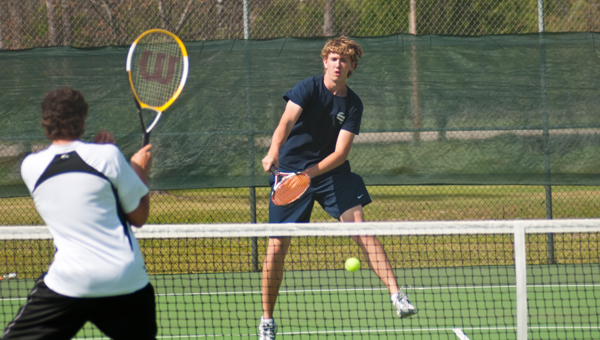 Jemison tennis player Drew Posey slams the ball to the ground during a doubles win over Brewbaker Tech on Thursday.

Both sets of Panthers won 9-0.

The win improves the boys to 10-2 on the season.

JHS is locked in a three-way battle with Dadeville and St. James for the two area positions that will qualify for the sectional tournament.

Another area match awaits on Friday, as Holtville visits.

It’s a home match but, like Thursday’s matches, will be played at Clanton City Park.

Jemison scheduled some of its competitions for Clanton this season because of uncertainty about the resurfacing of the Jemison City Park courts.

The courts have been resurfaced—for the first time in coach Benton Morton’s 10-year tenure. The Panthers played their first matches on the new surface on March 3 against Dadeville.

The improvements to the park also include new restroom and concession facilities.

“It’s going to be nice for the younger kids especially,” Morton said. “A big thanks to the city council.”

Jemison’s next match on the new surface will be April 14.

The JHS girls, meanwhile, improved their record to 3-9 with Thursday’s win.

Still, the Panthers have a chance to finish second in the area and earn a berth in the sectional.

Winning records: Chilton County’s boys tennis team has posted a 5-3 record so far this season, while the girls are... read more