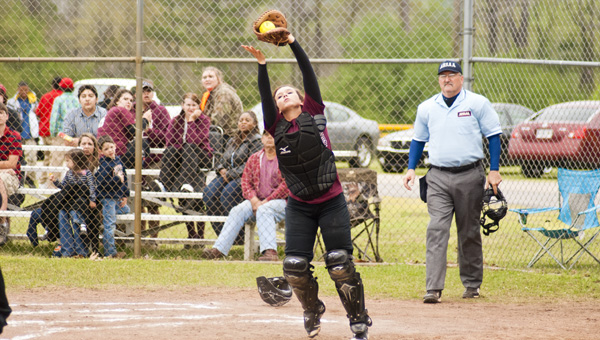 Ahead by five runs going into the seventh inning, Maplesville appeared to have Tuesday’s softball game in the bag.

Verbena scored seven runs on six hits and four errors in the inning to take its first lead of the game since the top of the first inning; however, Maplesville still won, 13-12, in eight innings.

Courtney Killingsworth was effective as the starting pitcher for the hosts until the seventh, when she wasn’t helped by her defense.

Autumn Smith pitched a scoreless eighth inning for MHS and earned the win.

Smith struck out a Verbena with bases loaded to give her team a chance to win the game in the bottom of the frame, and the Red Devils did just that.

Kiana Andrews led off with a single, advanced on a single by Madeline Anderson and scored when Alisha Blackman put the ball in play.

But back-to-back run scoring singles by Courtney Baugh and Smith helped Maplesville to three runs in the bottom of the first, and the Devils stretched the lead to 6-1 on fourth inning RBI hits by Morgan Little and Smith.

Verbena cut the lead to 6-5 in the top of the fifth. Two MHS errors helped, but two runs crossed the plate following a single by Victoria Fletcher.

The hosts scored four runs in the bottom of the sixth to seemingly put the game away.

Three Verbena runs had already scored when a turning point in the game occurred. VHS had the bases loaded, and what should have been a harmless ground ball off the bat of Krista Lane turned into a nightmare.

At least three Maplesville throwing errors later, all the Verbena baserunners—including Lane—had crossed home plate, and the guests had the lead.

But with two outs and runners on third and second in the bottom of the seventh, Smith managed a base hit to give her team new life.

Hancock was the losing pitcher.

Fletcher went 3-for-5 at the plate with a run scored and two runs batted in.

Smith went 3-for-4 with four RBI, and Andrews went 4-for-5 with two runs and one RBI.

Both Natalie Arnold and Little went 3-for-5 for MHS.

Chelsea Cox of Isabella pitches against Maplesville early during the second game of the Chilton County Softball Tournament, being held... read more