Competition makes you tough as Iron 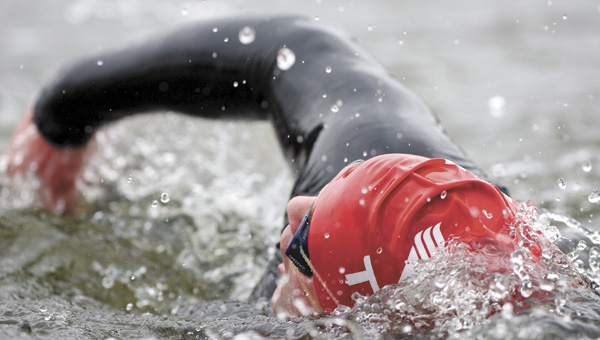 Erric Price conducts training swims across the slough near Grace’s Marina on Lake Mitchell no matter the weather—he even swims when temperatures near freezing.

Swim 2.4 miles. Bicycle 112 miles. Run 26.2 miles. Back-to-back. All in one day. The requirements to complete an Ironman competition may seem beyond human capacity, maybe even as though the participants enjoy torturing themselves.

But the training and competition isn’t torture for Clanton’s Erric Price; in fact, he gives a number of reasons why the event has become a focus of his life. 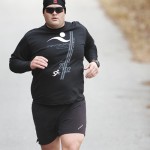 An Ironman competition includes a 26.2-mile run, so training runs are commonplace for Erric Price.

“The main reason we run is it’s such a great stress reliever,” Price said, but that’s just where he starts.

Ironman is the most difficult one-day endurance event in the world. It began as a challenge among a group of Navy Seals and has grown to encompass more than 50 qualifying events around the world each year, with more than 80,000 athletes competing for a chance to participate in the Ford Ironman World Championship held every October in Hawaii, where those Seals originally incorporated three separate endurance events into one.

Price will compete in the Ironman at Louisville on Aug. 28 and said it’s necessary to train nine months beforehand.

As part of the physical build up to be ready for Ironman, Price trained for and competed in the Mercedes Marathon in Birmingham on Feb. 13, along with a group of about eight friends, relatives and co-workers.

Going through a pair of shoes every month, inflamed tendons and all sorts of leg injuries are commonplace.

Training runs must be done outdoors, instead of on a treadmill, and on hilly roadways instead of a track to better simulate marathon conditions—so Price and company were often running in freezing temperatures. Because of the extreme distance of the runs, drinks and snacks must be set out along the path ahead of time.

Of course, nutrition is important before the runs.

“Basically, our whole goal is to get our urine clear by Friday afternoon (for a Saturday race), because if it’s clear, it means we’re ultra-hydrated,” Price said. 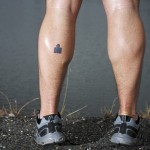 After completing his first Ironman competition, in 2010, Price got a small tattoo on his left leg to commemorate the accomplishment.

After the marathon, of course, Price began incorporating swimming and cycling into his training regimen.

Sometimes, two disciplines are practiced in one day—called a “brick”—highlighting the most difficult aspect of Ironman: switching immediately from one endurance event to another. Going from cycling to running, Price said, poses the biggest challenge because the legs become so accustomed to the cycling motion.

Price’s brother, 24-year-old Erron, ran the Mercedes in an attempt to qualify for the Boston Marathon.

“Us fat guys, we just try to finish it,” Erric Price, 27, said about his goal at Mercedes, but it brings up an important motivation behind his participation in endurance events.

Price will tell you he’s overweight at 240 pounds, but before he got into Ironman two years ago, he weighed just short of 300 pounds.

Taking after their father, Tim, a bodybuilder, the brothers were always athletic—they like to hike, camp and scuba dive among various other activities—but Erric Price needed something to drive him to get into better shape. Wanting to finish an Ironman competition did that because the training it requires pushes a person’s body to its limits.

“When the mind tells a person to stop, their body is only at 60 percent of what it can do,” Price said.

Price completed his first Ironman on Nov. 9, 2009, got a small tattoo of the Ironman logo on his leg and began training for a second competition.

The actual competition is difficult, yes, and there is also the $600 or so required to register, but there is another aspect: the countless hours spent training instead of at home with their family.

Price said he goes through all the trouble because he wants to serve as proof to out of shape people that they don’t have to stay that way.

He also wants to dispel the notion about running that it ultimately is harmful.

“I had rather my knee hurt me when I’m 55 than to have a heart attack when I’m 55,” he said. “The body loves training. I’m just a living testament that it can be done.”

We are the champions: The Chilton County Tigers claimed the county softball tournament championship with a 3-0 win over Jemison... read more