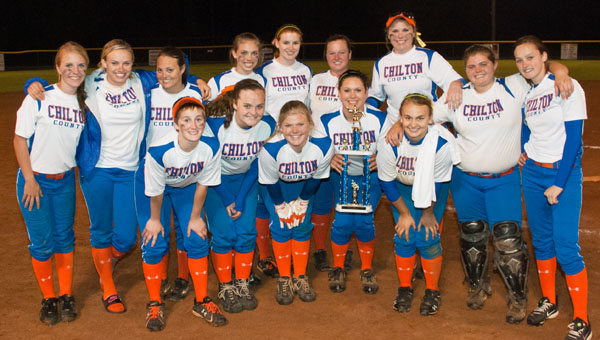 We are the champions: The Chilton County Tigers claimed the county softball tournament championship with a 3-0 win over Jemison on Monday.

Chilton County avenged a loss last season in a similar position and defeated Jemison, 3-0, on Monday in the championship game of the Chilton County Softball Tournament.

The Panthers snuck by CCHS, 2-1, last season behind a dominating pitching performance, but this time it was Chilton pitcher Brianna Cleckler shutting down the opposition in the title game and earning tournament Most Valuable Player honors.

Cleckler shut out JHS over seven innings, allowing two hits and one walk while striking out 12 batters.

Only Shelby Griffin and Shelby Lopez managed hits against Cleckler.

CCHS, meanwhile, got on the board early and made the runs hold up at Isabella, which was hosting the tournament.

Kricket Caton singled with two outs, and April Lewis followed with another base hit.

The Tigers tacked on an insurance run in the top of the third inning.

Mary Katherine Graham led off with a single and advanced on a hit by Rachel Johnston. Graham scored on a sacrifice by Lewis, and Cleckler had all the runs she would need.

Chilton County and Jemison took opposite paths to the championship game.

CCHS breezed by Thorsby, 19-1, in one semifinal game, while Jemison needed eight innings to trip up Maplesville, 3-2, in the other semifinal.

Monday’s three games were postponed from Saturday because of inclement weather.

CCHS coach Krisi Parrish said she was worried about the Tigers having another game immediately after playing so well against Thorsby.

“A lot of times when you have a big game like that, you come out flat the next one,” Parrish said. “But I thought we played great.”

The Chilton County Softball Tournament has been canceled Saturday due to severe weather, according to organizers. Coaches were expected to... read more