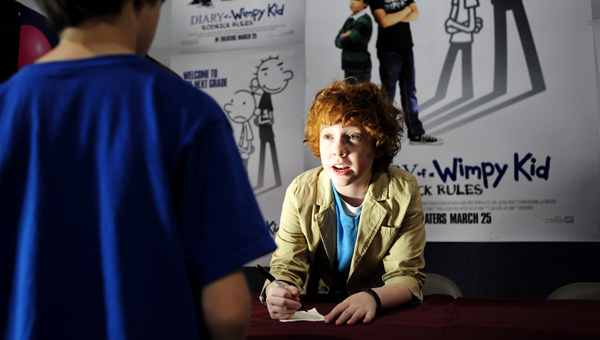 More than 100 fans of all ages flocked to Alabaster’s AmStar theater March 25 to meet a young star featured on silver screens across the nation. 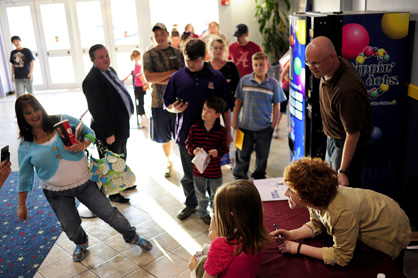 Actor and Alabama native Grayson Russell poses for photos with fans at the AmStar 14 Stadium Complex in Alabaster.

In the movie, Russell portrays the character Fregley, who is known in the book series as a character with questionable hygiene.

Even though Russell and his family were not set to arrive at the theater until 6 p.m., Helena resident Amy Turner and her daughters, Elizabeth and Sara, nabbed the first spot in line by getting to the theater two hours early.

“There wasn’t anyone else here when we got here, but the line has grown slowly but surely,” Amy Turner said as the line behind her stretched out the theater lobby doors and down the sidewalk.

“You don’t get a lot of opportunities to come and meet a movie star,” she added. “We thought it would be fun.”

About 20 minutes after Russell arrived, Tuscaloosa resident Lynn Tootie and her 9-year-old son, Will, smiled as they examined a movie poster signed by the actor.

“We drove about an hour and 15 minutes to get here today,” Lynn Tootie said. “He (Will) has bought every single book the day it has come out.

“Will’s father heard about it online, and knew what a big fan Will was, so he told us about it,” she added. “So we decided this morning that we were going to come out here.”

The 7:15 p.m. showing was the first time Russell’s parents, Jerry and Crystal, saw the movie, which was filmed mostly in Vancouver, British Columbia.

“I’m speechless. I really am. You just never know what God is going to bring your way,” Jerry Russell said. “Very few get to have a chance like this, and we don’t want to take it for granted.

“When we drove up and saw all the children lined up, we were nervous from the other side too,” Jerry Russell said. “For us, it’s a moment of celebration for all he has been able to achieve.”

Grayson Russell has previously starred in “Talladega Nights” and the original “Diary of a Wimpy Kid” movie, and launched his acting career after starring in a commercial for McKinnon Toyota in Clanton.

“The days definitely aren’t nine to five. Sometimes, he will get to a set at 10 or 11 at night and work through the night,” Jerry Russell said. “There’s a lot of adjustment for both the kids and the parents.”

Chelsea Cox of Isabella pitches against Maplesville early during the second game of the Chilton County Softball Tournament, being held... read more