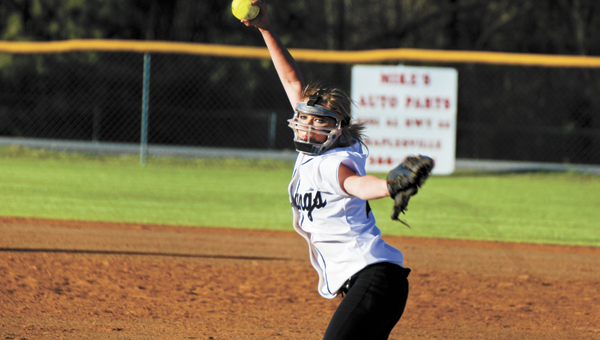 Chelsea Cox of Isabella pitches against Maplesville early during the second game of the Chilton County Softball Tournament, being held this weekend at Isabella High School.

The Chilton County Softball Tournament is being held this weekend at Isabella High School (this year’s host team).

Winners from Thursday included Maplesville, who beat the hosts 5-1 in the second game.

Jemison won twice, beating neighboring Thorsby, 4-2, in the first game and then Verbena, 3-1, in the night cap.

“We had to fight hard both games,” said Jemison coach Leighsa Robinson. “Verbena and Thorsby jumped ahead of us and played really well. We had to fight back to win.”

Tiffany Guin won both games for Jemison. Shelby Lopez hit a 2-run triple against Verbena, while Hannah Smith hit a 3-run double to win against Thorsby.

Saturday’s single elimination bracket starts at 9 a.m., with games throughout the day until the championship game at 5 p.m.

Admission to the tournament is $6 for adults and students each day. Games will be 1 hour and 15 minutes.

Jemison won the 2010 tournament with a 2-1 victory over Chilton County High School.