CES shells out change for fundraiser 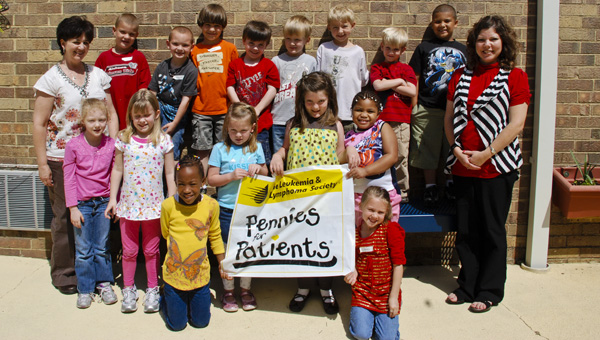 Preschool teacher and director Maria Porter (Right) and Rene Mims (Left) with her winning Kindergarten class who raised the most money for "Pennies for Patients" a fundraiser for The Leukemia and Lymphoma Society.

For the second year, Clanton Elementary students have gathered their change to raise money for the Pennies for Patients Campaign to be donated to the Leukemia and Lymphoma Society.

Students were given small boxes to bring change in each day for the month of February. The top winning classes for each grade level will receive a party of their choice and Wal-Mart gift cards sponsored by the Leukemia Society.

“I am surprised at the amount we raised in change,” said preschool teacher Maria Porter, organizer of the event for the school. “It’s amazing that even during this economic time we raised so much for this cause.”

Porter was asked to get involved with the campaign after her 6-year-old daughter, Jensyn, was diagnosed with leukemia in 2008.

This year, Jensyn was selected as one of the campaign’s honorary patients for the program. Her picture was on the campaign’s poster in every participating school.

The school was ranked as the second school in the state to raise the most money for the organization last year.

“A special part of this to me is last year my oldest daughter was in the class that raised the most money, and this year Jensyn is in the winning class,” Porter said.

Rene Mims’ kindergarten class raised the most money overall in the school, $364.22, and will be receiving a pizza party and the gold pennant.

Each class had a goal of $100. Those classes that met the goal will receive a pennant to hang in their room.