Two high school seniors from Jemison High School, Misty Hawoiie and Laura Leavings, received an opportunity to march with the University of West Alabama band in the 91st annual Mardi Gras Crewe of Columbus parade. They also received a scholarship offer to attend UWA in the fall. 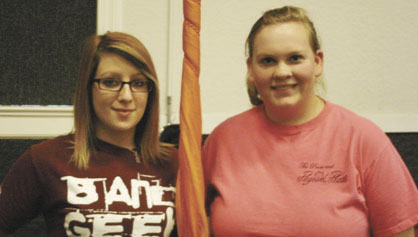 UWA has been the lead band in the parade for three years, which is a major honor in Mobile. In addition, the lead band annually performs a 30 minute show on the steps of the Mobile Civic Center prior to the parade.

Glenn Smith, UWA band director, is currently the only college band director in Alabama to invite high school students to march with a collegiate level band. Smith developed the idea several years ago as a recruiting tool.

Initially between seven and eight students participated. This year a record of 41 high school students from 23 schools throughout Alabama and Mississippi marched in the parade. This allowed the UWA band, deemed the Scarlet Band from Tiger Land, to surpass the 150 mark for the first time in school history.

Many of the invited high school students have previously applied for enrollment at UWA. While a few others, are those Smith and his assistant band director, Adam Anderson, have personally recruited. All of them are sent letters and are given the option of participating.

This year, Smith received 60 responses, but could only take 41 due to the amount of uniforms available and other essentials needed.

Anderson cited he likes the fact that the high school students are diversified and come from all types of backgrounds. He also expressed that unlike bigger university bands, UWA also doesn’t typecast. “Certain schools want one type of sound. Here at UWA, we accept all styles of musicians. It all blends together and creates this one of a kind sound. We also want members of our band to have some sense of freedom to be who they are.”

“This year’s parade was the most successful we’ve ever done. We sounded and looked great,” Smith said. “The biggest thing we get out of participating is the advertising of our fine university. I feel 150 band members is a great number to level off at because I want the opportunity to personally know each member of the band, as well as, their families. I also want to be able to help the students with their grades, make sure the college experience is going well for them, and not be so large that I lose that personal contact.”

Tigers come back to beat MHS

By James Dubuisson | Special to the Advertiser A fifth inning rally and the relief pitching of Kadie Coker helped... read more