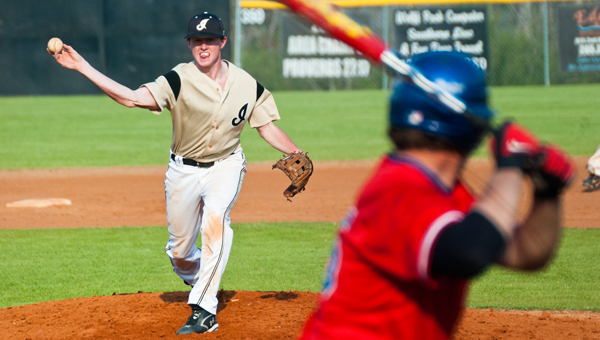 Just in time: Isabella first baseman Cody Smith, left, stretches to receive a throw and get out Verbena’s Garrett Dennis during Friday’s game.

Isabella batters showed patience at the plate Friday, drawing 13 bases on balls in five innings and defeating Verbena, 14-1, in the final game for both teams in the Chilton County Spring Break baseball tournament. 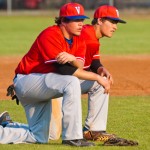 Taking a breather: Verbena players Garrett Dennis, left, and Christian Coston take a moment to relax while a relief pitcher warms up Friday.

The homestanding Mustangs also pounded out 11 hits, including a double by Sawyer Cahalane.

Verbena, meanwhile, could muster only two hits and two walks off the IHS pitching.

Nick Noah started and earned the win for the hosts, holding the Red Devils to one earned run on two hits and one walk in four innings pitched while striking out two.

Tyler Smith came on in relief and pitched the fifth inning, walking one but allowing no runs.

The visitors did score in the top of the third inning, when Jacob Montgomery led off with a double, advanced to third base on an out and then crossed home plate after a wild pitch.

The Mustangs increased their lead to 8-1 in the third, when four consecutive batters reached base to open the frame.

The backbreakers for Verbena might have been a two-run single by Cody Smith and an RBI double by Cahalane.

Six more runs were added in the fourth, two of those runs coming on a single by Smith, who finished the game 3-for-3 with a walk, four runs batted in and one run scored.

Neither Travis Williams nor Jagger Cook were retired in the game.

Isabella lost their first game of the day, 15-7, which was also part of the tournament.

Williams suffered the loss, though only five of the 13 runs allowed in his four innings pitched were earned.

Noah went 4-for-4 at the plate with two runs, and Smith was 2-for-3 with a stolen base and an RBI.