Local celebrity Grayson Russell will appear in the sequel to the 2010 Hollywood blockbuster Diary of a Wimpy Kid. 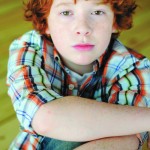 Grayson will make an appearance at AmStar 14 Stadium Cinema in Alabaster for a meet and greet and autograph signing on Friday, March 25, the same day the movie premieres nationwide.

“I’m very excited and can’t wait for the premiere,” said Grayson Russell. “I’m really looking forward to it. We worked nine-and-a-half hour days on this film except for weekends.”

Diary of a Wimpy Kid: Rodrick Rules is Russell’s first sequel. It was filmed in Vancouver, Canada and is based on the best-selling, follow-up novel by author Jeff Kinney.

The movie was filmed in approximately two and a half months and follows the adventures of Greg Heffley, a middle school student, alongside his awkward, high-strung classmate, Fregley, played by Russell.

“I’ve never done a sequel before so it was like a giant family reunion,” Russell said. “We have a few new characters so they were very fun to work with and this was the first time my dad was able to come visit the set and meet everyone, so it was really fun.”

Grayson father, Jerry Russell, also enjoyed his time on the movie set with his son and is looking forward to the premiere as well.

“I went up there for about 10 days to observe, and they really make it exciting for the children and it’s a lot of work; most of the children are in school,” Jerry said. “I’m absolutely excited about the sequel and the premiere.”

Crystal Russell, Grayson’s mother, said she is excited too and was hoping for a sequel.

“The studio wouldn’t give the green light to do the sequel until they saw how the first one opened in the box office,” his mother said. “It opened very well, so we’re all very excited.”

The meet and greet autograph signing will begin at 6 p.m. at the Colonial Promenade.

For more information on Grayson Russell, visit www.imdb.com/name/nm2124254/ or search for him on Facebook. To view the official Diary of a Wimpy Kid: Rodrick Rules trailer, visit www.diaryofawimpykidmovie.com.

Local student to visit China as part of ambassador program

A Chilton County High School junior is planning to travel to China this summer as part of the People to... read more