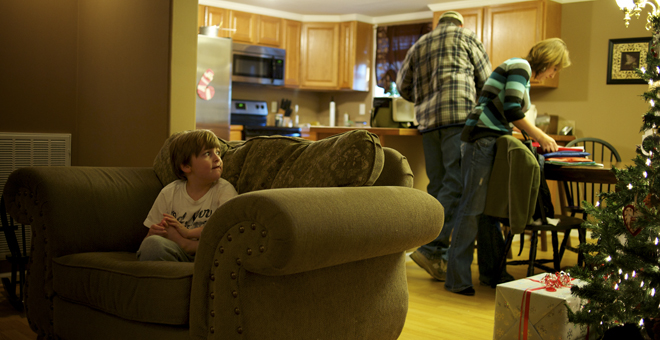 Willie and Ginger Welch prepare activities for Casen as he waits patiently.

It’s a condition that some parents are embarrassed to discuss, but families and teachers are facing the challenges of Autism every day.

Ginger Welch, a local Clanton mother who has been dealing with Autism for four years with her son, opens the doors to their home and allows the world to take a look inside.

Welch’s son, Casen, will get over-stimulated in an active environment and withdraw, and when he is feeling a lack of stimulation he will start “stimming,” doing little things to stimulate himself, such as tapping on things, jumping up and down or making noises.

“He needs a lot of physical activity so we try to keep him occupied,” said Welch. “When he needs deep pressure, he hits and jumps. We do the wheelbarrow, where I hold his feet and he walks on his hands. This puts pressure on his shoulders and is playtime for him because he does not have ‘pretend play.’”

Autism does not stop once a child leaves the home; teachers who teach special classes also face unique challenges in the classroom.

“Each child is unique; no child is the same,” said Amanda Anderson, resource at Jemison High School. “There are behavioral and communication differences, and it’s a trial and error process on how to communicate with each child individually.”

The biggest test is to challenge students without making them feel challenged, because if it stresses the student, he or she will throw tantrums, get frustrated and quit working with you, said Anderson.

Other challenges in the classroom include fire alarms, running out of something on the menu, liking or not liking something someone else likes, interaction with other children and having to eat certain textures of foods.

“Each child that I have worked with had certain foods they wouldn’t eat. It is known that autistic children like breaded foods, such as chicken nuggets and French fries. It deals with the sensory receptors and how the texture of the food feels in your mouth.”

Each child is an act of patience for everyone involved in the child’s life, said Anderson.

One in every 150 children has autism in the United States, said State Senator Cam Ward, who formed the Alabama Autism Task Force and is also involved with the ASA and Autism Council.

“A lot of people rely on teachers, and the teachers wish they had more knowledge,” said Ward. “I have a child with autism, and it has allowed me to get involved with other groups and involved with the Autistic Society of Alabama, statewide advocacy for relations.

“It tugged at my heart for me to get involved with the legislative process. It is very important to me and is the highest on my agenda. There are a lot of shortfalls with the government with how we help them, and there are not enough programs or assistance to help those on the autism spectrum.”

With the Welch family, days early in Casen’s childhood were spent trying to regulate his body sensations so he could make it through the day. Their days started at 2 a.m. because his body no longer knew if it was night or day.

“During the day, I would laugh and make jokes of the obstacles we were facing, and then at night I would cry myself to sleep,” she said. “We did sensory integration therapy and floortime until he could function well enough to try other options.”

At the age of 4, Casen was able to attend PALS preschool class at Clanton Elementary and has had breakthroughs between the ages of 4 and 6.

Casen is now in Kindergarten and loves school, Welch said, with a smile on her face.

“If nothing else, this is the message that I would like every parent to remember,” said Welch. “Try everything, and don’t get discouraged when it fails because 99 times out of 100 it will. But when that 100th thing works, the other 99 things will be forgotten. My goal will always be complete recovery.”

In celebration of the church’s 34th anniversary, The World’s Church of the Living God in Clanton is presenting a concert... read more