Making it in small town, downtown 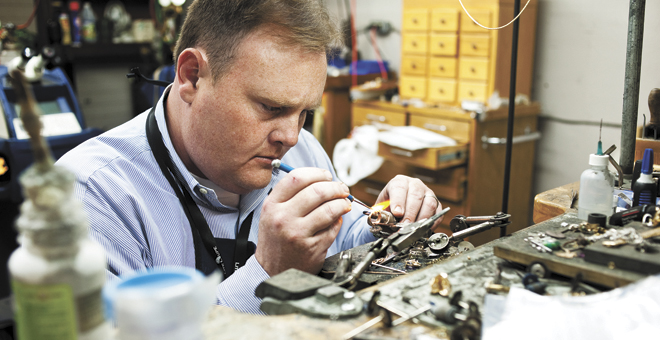 Stacey Watson repairs jewelry in Edwards’ repair trade shop located in the back of their multi-generational jewelry store located in downtown Clanton.

“It takes a lot of prep time to get the store ready for business,” said Wyatt. “Presentation is key.”

Edwards Jewelers is a multigenerational family business located in downtown Clanton established by Eddie Edwards and his brother-in-law, Buck Daniel, 60 years ago.

Customers can find the latest jewelry trends and order custom made pieces at Edwards Jewelers, whose showroom is blanketed with some of the finest name brand jewelry and timeless pieces.

Well-known companies such as Sara Blaine, Pandora, Natalie K. and five state-of-the-art watch brands can be found in its showroom.

In 1950, what used to be Edward and Daniel Credit Jewelers began with two showcases located in Chilton Home Furnishings. Between 1951 and 1952, the duo rented the store next door on Sixth Street, but in 1953, Eddie Edwards bought out his partner and changed the store’s name to Edwards Credit Jewelers.

In 1968, the store moved again to its present location, the old Wright Drug Store.

“The first four years of business I can imagine were pretty hard,” said Stacey Watson, Eddie’s grandson, who took over the store in 1991 with his uncle, Danny. “But for the past 20 years we’ve had it made. We’re lucky to have the citizens of this community and the pull in surrounding areas because we have been here for so long.”

The store hasn’t seen too many struggles throughout the years and prides itself on being strong and successful, said Watson.

“We’ve always done pretty well,” he said. “Even when the market crashed three years ago, we were only down for a couple months.”

The store was remodeled in 2010, and the latest diamonds, watches and silver trends have been added. The store has a full-scale jewelry repair trade shop with the latest laser repair technology in place. The store buys, sells, appraises and repairs jewelry.

“We were here yesterday, today and we will be here tomorrow and for the next 60 years and beyond,” said Watson. “We want to serve the community and meet their needs. We’re dedicated to staying here.”

In contrast to the multigenerational business, The Nerd Guy, a local upstart business located in downtown Clanton, is quickly finding its place in the community.

“We do not sell computers,” said Rebecca Montalbano, co-owner, as she laughed. “Other than that, we do everything for computers from repairs, upgrades and virus cleaning to virus protection upgrades.”

Customers who have damaged their laptops and have data they want retrieved off the laptop’s hard drive can take it to The Nerd Guy, located on Second Avenue, and have it retrieved.

“A lot of times when people bring us a machine, it’s an older machine and we only charge $25 for a diagnostic,” said Montalbano. “We do not charge by the hour and that has helped our business out a lot here in Clanton.”

Chris and Rebecca Montalbano started The Nerd Guy in Vestavia and operated there from 2001 to 2006. They established their niche early on because of Chris’s work with Southern Networking Services, a large networking firm that solely worked with large corporations. The couple noticed the lack of companies addressing the home market, so they chose to specialize in home network, single office and home office. They provide service to doctors’ offices and individuals, and have had a couple of large accounts.

“We came to Clanton because I’m from here; I graduated from Verbena,” said Montalbano. “This is a great solution for us without having to move all the way to Montgomery for his job.”

Shortly after, Chris, “The Nerd Guy,” who has been in networking for 20 years, landed a contract with Colonial Bank, so the couple shut down their operation as a business but kept their corporate identity.

After the collapse of Colonial Bank a year ago, Chris’ contract ended, so the couple decided to get The Nerd Guy back up and running.

“There has been an amazing number of clients that have done business with us right here in Chilton County,” said Montalbano. “It’s deceptive because we have such a large area and it’s far in between businesses so you don’t think there are that many businesses, but our client list here is a completely separate group of people from our Birmingham client list and it’s almost as big. We are really thrilled with that and thrilled to be able to be here and be a service for the community.”

What The Nerd Guy lacks, unlike an older business, is word of mouth advertising, which is vital in a town like this, said Montalbano.

“But what we lack there we have in expertise and experience with technology,” she said.

Chris has numerous advance certifications. For example, he is a Microsoft certified engineer. The company’s lead tech, Tammy Carden, has worked as a tech for Staples for four years and while working for them performed internal training and gained expertise.

“It’s one thing to know something; it’s another to have a plaque on the wall that says you know something, so that’s a really big deal for us, establishing this business as we do know what we’re doing here and we’re here to stay.”

The business has two full-time techs, Carden and Patrick Banks. Stacy Owens is the manager, and they all have their areas of expertise.

Since moving to Clanton, the business has had its struggles trying to stay afloat in the economy.

“When we started, we had some really slow months, so slow that we had to tell our landlord when we moved here to please start us out on a six-month lease,” said Montalbano. “The slow months are a part of any business. We’ve had so many people in the community come and say, ‘We’re so glad you’re here; we need you here,’ and that’s a huge encouragement when everything else is not looking well,” she said.

One of the business’ short-term goals is to expand its hours so students can use its free unlimited Wi-Fi connection, and a long-term goal is to add more services for businesses, such as a place to make copies because that is a complete void for the Chilton County area, said Montalbano.