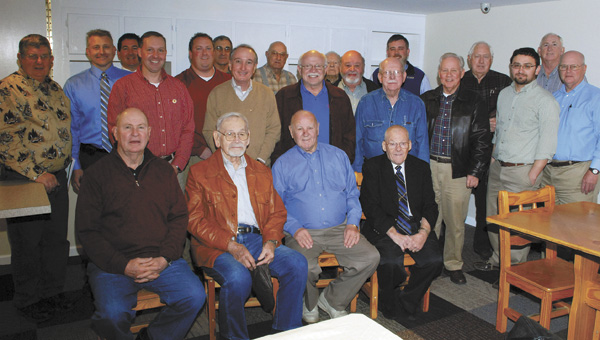 Looking into Clanton’s 40-member Lions Club, you will find a group of men who are passionate and dedicated to their organization and to helping others see the world more clearly.

“The Lions Club International is all about sight,” said Bob Stone, Clanton Lions Club member. “The tentacles of eye care are far reaching in serving the community.”

The Lions assist needy individuals in the community who are at risk of losing their sight with obtaining glasses, eye treatment, exams, surgeries and other vision correcting solutions.

“The motto of the Lions Club is ‘We Serve,’” said Stone.

The Alabama Lions Sight Conservation Association, a non-profit state project of the Lions Club of Alabama, is the No. 1 service project for the club and has funded the necessary eye care for low-income adults and children for more than 60 years.

The Lions work close in partnership with Clanton’s local optometrists to provide patients age 18 and under with the proper eye care.

“This service is important, especially today more than back then because of the economic times,” said Jim Driggars, O.D., who has been practicing since 1976 and was the first local doctor the Lions Club partnered with.

“It is important for children, especially because first through 12th grade is the time the child is getting prepared for the next 50-60 years of their lives, and if the child cannot see, then it will put them in a deficit in the classroom — then they are crippled for life,” said Driggars. “There is a time frame, and if you lose that time frame, you cannot get it back.”

“Children can’t afford their own destiny, and some parents can’t afford it, so the Lions Club steps in and provides the children with the examinations and consultations they need,” he said.

Local Clanton resident Debbie Lockhart knows exactly how big of a help the Lions Club and Sight Savers can be.

When Lockhart’s son, Geoffery, was in the fifth grade, he became legally blind with 24/100 vision. He was born with ocular albinism, an inherited condition in which the eyes lack melanin pigment. The Lions Club and Sight Savers were able to assist Geoffery in getting a Closed Circuit Television System (CCTV), a magnifying tool for individuals with low vision.

The CCTV is a video camera connected to a monitor, such as a computer.

The reading material is placed under the camera, and an enlarged image is shown on the screen. The images and other features, such as color, text and auto-focusing, can be adjusted.

“The CCTV kept my son from having to go to the Alabama School for the Blind in Talladega,” said Debbie Lockhart. “The CCTV allows him to put the book under the light so he can see it on the screen. It made a world of difference and was a lifesaver.”

The Lions Club provided a quick turnaround for the fifth grader. Within approximately a month, he had the $5,000 – $7,000 CCTV, Debbie Lockhart said.

“We had no idea where to go or who to talk to about something like this,” said Lockhart. “The Lions Club helped us twice, and Sight Savers helped put it together. They didn’t hesitate; they started that night and worked with us in every way they could. We will never be able to thank them enough.”

Before, Geoffery could not take notes for school and depended on his mother to read, and now he can do those things on his own, said Lockhart.

The CCTV helped the fifth grader gain back his independence.

Since then, Geoffery vision has progressed to 20/100, and he is a college graduate from Jacksonville State University.

The Clanton Lions Club has helped more than 1,000 patients over the years and about 70 to 80 patients a year, said Martin, who is also involved in the club’s Eye and Tissue Bank.

The eye and tissue bank provides tissue and eyes from donors for research and transplantation to those in need.

Clanton Lions Club participates in numerous drives and fundraisers to help and support better eye sight. A recent drive was the “Mission for Vision,” where the Lions collected more than 100 pairs of eyeglasses at Martin Funeral Home and the Chilton County Probate Office in support of the Alabama Sight program. The glasses were given away during mission trips to people who needed them.