Campers On Missions help local cause 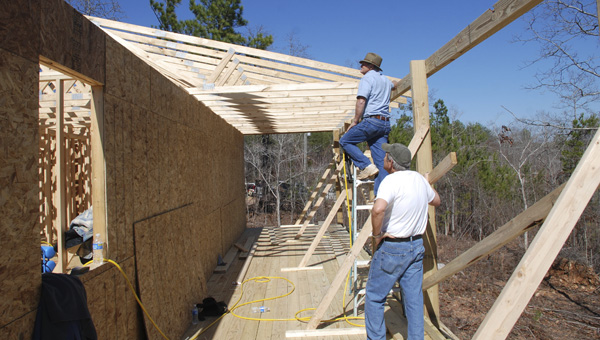 Members of Alabama Campers on Missions help build a cabin at Raleigh's Place.

For most retirees, their 60’s and 70’s are a time to relax and reflect on the hard work they’ve done over the course of their lives.

For the Alabama Campers on Missions, those are prime ages to get to work.

The Campers on Missions, or COM, is a national organization of Christian campers who get together and share their faith while they camp. They also volunteer on a short-term basis for projects and camps.

“We live in our motor homes and campers while we work,” said ALCOM Event Coordinator Ray Van Slyke. “We’ll work for three weeks at a camp.

If you’re expecting a youth movement here, you’ve come to the wrong place. You’ll be hard pressed to find an ALCOM member under 65.

“Our average age is anywhere from 72 to 75,” said Van Slyke. “All of us are volunteers, and some are full-time volunteers. [Some will] commit 8 to 10 months [to projects].”

The current project has ALCOM members teaming up with their Mississippi counterparts to help build cabins for Raleigh’s Place, a home for children who come from difficult situations.

“We felt like the Lord was leading us here,” said Van Slyke.

Not only do the male members come to help, but they bring their wives along as well. While their husbands work on building the cabins, the wives stain cabinets and help with some of the children who make their home at Raleigh’s Place.

“Some of the wives are retired teachers,” said Sharon King, director of Raleigh’s Place. “They’ll come in and help teach some of the home school classes here.”

While having only three weeks is a short time, Van Slyke guarantees that the Campers on Missions will have the job done.

“We’ll build these cabins from the ground up,” he said. “We’ll stick with it until it is finished.”

For more information on Campers on Missions, go online to www.alabamacom.org.