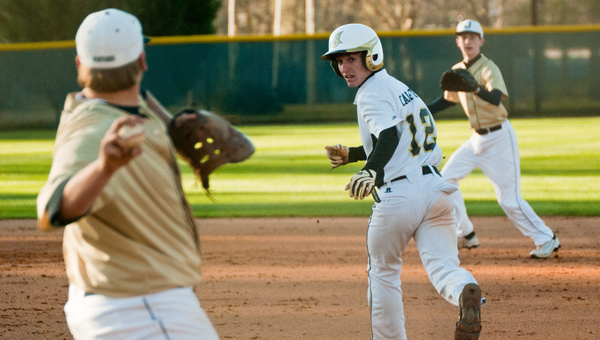 Caught in a pickle: Isabella’s Trey Calfee, center, gets caught in a rundown between Jemison first baseman Jackson Mims, left, and second baseman Jacob Bass during Friday’s game in the Chilton County Baseball Tournament. Jemison won and will play Thorsby at 10 a.m. Saturday for a chance to advance to the championship round.

Chilton County gained an advantage over its competitors in the county baseball tournament with Friday’s 9-0 win over Thorsby.

THS and Chilton came into the game as the only two unbeaten squads remaining in the double-elimination tournament. 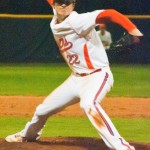 Ace on the mound: Chilton County High School pitcher Chance Calloway shut out Thorsby on Friday, allowing three hits and one walk in seven innings while striking out seven.

But now Thorsby will try to avoid elimination when it plays Jemison at 10 a.m. Saturday at Clanton’s Jack Hayes Field with a berth in the championship round on the line.

Jemison lost to Thorsby on Thursday but stayed alive in the tournament and earned a rematch with the Rebels via Friday’s 8-4 win over Isabella.

Isabella’s Trey Calfee walked in the third inning of a scoreless game and then scored on a sacrifice fly by Austin Haigler.

But JHS responded with four runs in the bottom half of the inning. Scott Clements, Jackson Mims, Alex Campbell and Kyle Dennis all scored.

The Panthers doubled their run total in the fourth before Isabella threatened with three runs in the sixth inning.

Two of those runs came on a home run by Nick Noah that also scored Haigler.

Haigler started and suffered the loss for Isabella, while Chase McCary earned the win and Cruz Martinez pitched the last two innings for Jemison.

Clements, Dennis, Zak Kaylor and Trahe Smith all went 2-for-4 for JHS.

Calloway did not allow a run in seven innings of work. Thorsby did manage three hits and one walk but seven strikeouts.

Chilton recorded six hits, and three of their runs were unearned.

Adam Minor went 2-for-3 with a walk, three runs scored and a run batted in.

Cameron Cummings was 1-for-2 with a double, two walks and two runs; and Calloway went 1-for-3 with a walk and two runs scored.

Chilton County will play the winner of the Jemison-Thorsby game at 12:30 p.m. Saturday.

Thorsby’s baseball game at Jefferson Davis on Wednesday was rained out. The game will be made up at 4:30 P.m.... read more