Jemison was efficient on the mound and at the plate Thursday in defeating Maplesville, 4-0, and staving off elimination in the Chilton County Baseball Tournament.

Starting pitcher Zak Kaylor retired the Red Devils on three pitches in the top of the first inning, setting the tone for his performance the rest of the way. 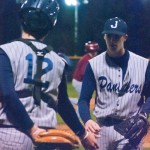 Offensively, meanwhile, Jemison recorded only three hits, but each of them led to a run.

Jacob Bass led off the bottom half of the first inning with a base on balls, advanced on another walk and then scored on a single by Scott Clements.

Clements drove in Bass with another single in the third inning after the leadoff man reached on an error.

Clements walked in the sixth inning, and his courtesy runner, Trahe Smith, scored on an error.

The scoring was concluded when a Cruz Martinez single plated Dylan Higgins, who was running for Alex Campbell.

Smitherman allowed two runs, one of which was earned, on two hits and three walks in five innings while striking out three Panthers.

Maplesville is eliminated from the tournament with the loss, while Jemison will play Isabella at 4 P.m. Friday in another win-or-go-home contest.