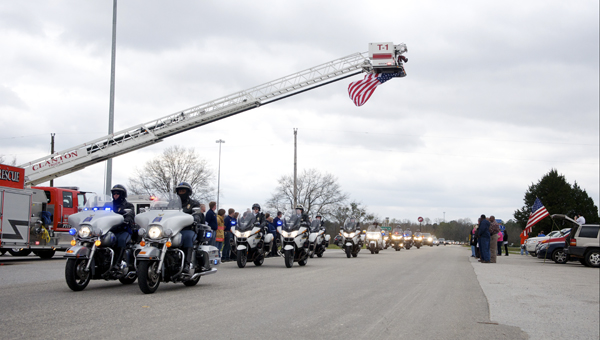 Josh Newman was and still is a lot of things to a lot of different people — a husband and father, a son and grandson, a brother to his siblings and, by his badge, to the many law enforcement men and women who attended his funeral Thursday.

But he was remembered by everyone as a hero who died doing what he did every day — trying to help people in need.

Newman died Saturday after his patrol car hydroplaned and struck a power pole in Thorsby. He was responding to an accident that involved injuries to children.

“He was out to help people. He loved his job and we love him,” said the Rev. Kalvin Smitherman. “He was a man of God, and he did his work like he should have.” 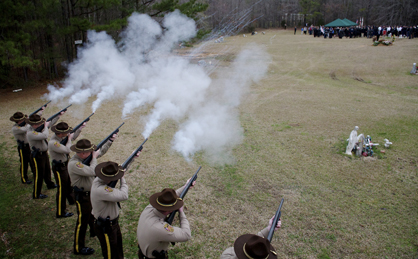 Smitherman officiated the funeral service, held at the Jemison Municipal Complex, with the Rev. Tony Christensen.

Christensen echoed how Newman loved his job, despite it being a dangerous and sometimes thankless one.

“I thank God for a man like that,” Christensen said. “He knew he would have to be in a dangerous position. … It’s a position where you are underappreciated and underpaid.”

Smitherman, looking over an auditorium filled with many law enforcement officers from across the state, thanked the men and women in uniform.

“They take care of us in this country. Pray for them; hold them up,” Smitherman commissioned those in attendance.

In this time of grief, Smitherman encouraged everyone not to “look to man (for understanding), but to Jesus.” 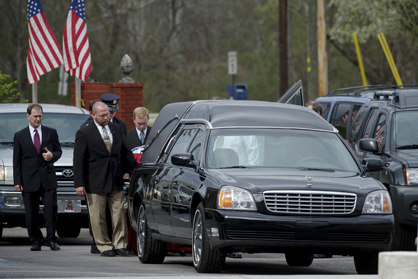 Pallbearers carry the flag-draped casket of Officer Newman from his funeral at the Jemison Municipal Complex. (Advertiser Photo / Jon Goering)

The burial ceremony included a 21-gun salute and a helicopter flyover. “Taps” and “Amazing Grace” on the bagpipes were played before a moment of silence to honor Newman.

The city of Jemison has established the “Officer Josh Newman Memorial Fund” at BB&T bank branches for the family. Contact the Jemison Municipal Complex at 688-4492 or BB&T at 688-4186 for more information.

Officer Newman's family members make their way through a line of saluting officers from across Alabama. (Advertiser Photo / Jon Goering)