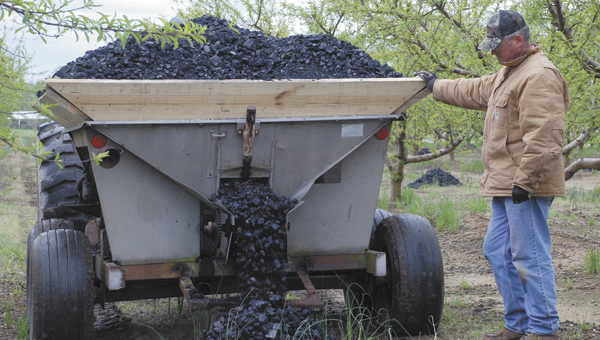 Chilton County peach grower Henry Williams and other growers use several techniques to protect their crops, including burning coal piled up throughout orchards. Frost presents a threat in late spring after peach trees have already started producing fruit, which would be available for harvest in late May or June.

Much work goes into the production of peaches, Chilton County’s most famous crop.

But factors beyond the control of peach growers play just as important a part.

“You do the best you can,” said Jim Pitts with the Chilton Research and Extension Center, which aids local growers in their efforts to produce the best harvests possible.

During winter, peach trees need a certain amount of time—at least 1,000 hours, depending on the variety—with temperatures near freezing. Chill or dormant hours are calculated from Oct. 1 through Feb. 15. Temperatures need to be below 45 degrees to count toward the total.

If trees don’t receive enough cold temperatures, they will display an extended bloom period, and the peaches will be long and pointed. An ideal amount of dormant hours produces a “popcorn bloom,” where trees bloom suddenly and all at once, and fruit that is desirable in appearance.

If the middle of February is approaching and growers know their trees haven’t had enough dormant hours, they may consider a product that is applied to trees that makes them behave as though they’ve had more dormant hours. 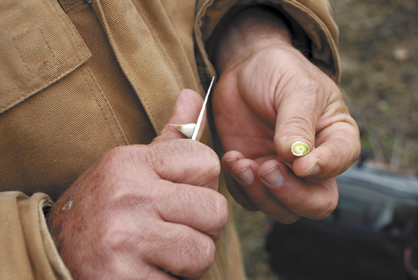 Chilton County peach grower Henry Williams demonstrates how to tell if young peaches have been damaged by freezing temperatures.

If trees receive too many dormant hours, they may bloom too early and be subjected to the growers’ worst fear: the late freeze, occurring in late March or early April.

Two to three weeks after the bloom, the fruit has begun to grow, shedding petals and the shuck that protects the bud. That’s when the peaches are most vulnerable.

They can withstand some cold, but temperatures at 28 degrees or below for as long as two hours will begin killing the fruit.

“You may have some trees that are up against a tree line or close to a barn, and you may have some that are in a low lying area. That can affect the temperature,” Pitts said. “But you don’t want to get close. That’s why you’ll bring in a helicopter and use wind machines.”

Pitts said two years out of every five will see a late freeze that damages a year’s crop. Some late freezes are worse than others. Pitts said there have been about four remarkably damaging freezes since he came to the Extension Center in the 1980s.

Peach grower Henry Williams has seen plenty of freezes. His father purchased an orchard in 1955, and Williams was born in 1956. Other than seven years Williams spent in school, he’s spent his whole life in an orchard.

“I got out [of college at Auburn University] on Valentine’s Day in 1982, and I started working in a peach orchard the next day,” he said.

Williams, who works orchards in the Collins Chapel community and at the southern edge of Thorsby just off Highway 31, said hail is also a concern during the formative stages of the peach crop. Williams remembers a year in the early 2000s when a late freeze was forecasted and he used his wind machines and borrowed helicopters to save his crop.

“Maybe three-fourths of the county lost their crop that year, but I actually made a full crop. I was very, very fortunate,” Williams said but then remembers how there is no room for complacency in the peach growing business. “Everything I saved that year, I lost the next year to hail.”

Even if a freeze kills some buds, growers will go through and thin the trees of excess fruit so what is left can grow bigger and so the tree can be picked more efficiently. This step requires more hired labor than actually harvesting the fruit, Williams said.

Pitts said an average tree produces about 4,000 flower buds, but growers keep only about 5 percent, knocking the rest off within a six-week time period with a plastic wiffle ball bat or a piece of piping.

“If you don’t go through there and do that, you’ll get those ‘ping-pong’ peaches,” Pitts said, referring to the peaches’ small size. “Folks want them big, and the bigger they are, the better they are.”

Pitts is a friend to the growers, and his advice is usually treasured, but one of his points probably falls on deaf ears.

“The growers would all do better if we all ended up with half a crop,” he said. “Then, your supply doesn’t exceed your demand, you can set the price where you want it. You don’t have to thin them as much.

“It can be a blessing (for a late freeze to kill a portion of the crop). Of course, you hope that you have all of yours and your neighbor doesn’t have any, and that averages up to a half.”

In addition to growing and picking the peaches, Chilton County’s growers must develop relationships with grocers that will sell the fruit to the public, work out a way to deliver the fruit in a timely manner and market their product.

“It ain’t for the faint of heart,” Pitts said.

The town of Verbena has a long and rich history. The community was founded by affluent Montgomery citizens fleeing yellow... read more