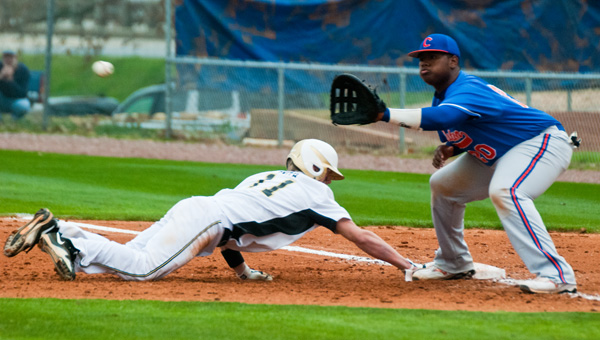 Back to the bag: Isabella’s Tyler Smith, left, dives back to first base Tuesday before Chilton County first baseman Delondre DeJarnett can apply a tag.

Chilton County and Thorsby on Tuesday established themselves as favorites in the county baseball tournament.

The Tigers and Rebels defeated Isabella and Jemison, respectively, to become the only unbeaten teams left in the double-elimination tournament.

CCHS began the day Tuesday by defeating an IHS team, 8-1, that had drawn a first-round bye.

Isabella could muster only three hits, in fact, but the second was a home run by Sawyer Cahalane.

Harris was the winning pitcher, holding Isabella to one hit and two walks in 3 2/3 innings pitched while striking out eight.

The Tigers plated two runs in the bottom of the first inning and four more in the second as Nos. 3-4 hitters Craig Headley and Adam Minor drilled back-to-back run scoring doubles, but Cahalane, the IHS starter, settled down and allowed only two runs in the next five innings.

One of those runs was a solo home run off the bat of Headley.

The second game of the day was controlled more by the pitchers than the batters.

Jemison and Thorsby combined for only six hits, but THS took advantage of Jemison errors to score three unearned runs.

Parker Bryan led off the home half of the first inning by reaching on an error and scored on another JHS miscue.

Matthew Morgan went through a similar trip around the bases in the fourth inning. Jason Price also reached on an error and scored in the frame.

Blake Elkins concluded the scoring by singling with two outs in the sixth and scoring on a Bo Hoffman single.

Cody Carroll shut out Jemison through seven innings, holding the Panthers to three hits and two walks while striking out nine.

CCHS and Thorsby will now get a break; they won’t play again until Friday at 7 p.m., when they will face each other to see who goes into Saturday with a one-game advantage.

Isabella plays Verbena at 4 p.m. Thursday, followed by Jemison versus Maplesville. Both will be elimination games.

Jemison’s softball team picked up its first win of the season Monday, 5-2 home at home over Thorsby. Some younger... read more