Tigers, Panthers off to fast starts 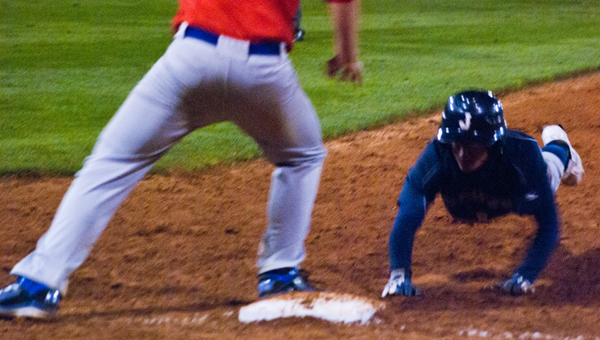 Back in time: Jemison’s Trahe Smith, right, dives back to first base during Jemison’s win over Verbena.

The Tigers have won four consecutive county tournaments in which they’ve participated, but that number doesn’t include the past two seasons, as the event transformed from a week-long affair at Clanton’s Jack Hayes Field to a two-day tournament that didn’t include all county teams (Jemison won last year’s tournament, and Thorsby won the year before).

With Thorsby hosting, the 2011 tournament returned to its traditional format.

CCHS also hopes it returns to its traditional result.

The Tigers (5-2) pounded out 13 hits Monday, including four of the extra base variety.

Maplesville (5-2) pushed a run across in the top of the first inning against Cummings, as Jared White singled with one out, advanced to third base on an error and scored on a wild pitch.

But Chilton tied the game in the bottom half of the inning as Kip Moore walked with one out, advanced to third on an error and scored on an infield singled by Bobby Smith.

CCHS added two runs in the second inning, on a double by Moore, and three runs in the third, two on Thomas’ home run, to chase Maplesville starting pitcher Tyler Crumpton, who suffered the loss.

Cummings was the winning pitcher, allowing four hits and three walks in seven innings while striking out 12.

One of the squads that should challenge Chilton County, Jemison also won Monday, 18-5 in five innings, over Verbena.

Every Panther in the starting lineup had at least one hit and scored a run.

Kyle Dennis earned the win for JHS, allowing three runs on four hits and one walk in three innings while striking out four.

For Verbena (0-5), both Phillip Hensley and Christian Coston drove in two runs.

Coston suffered the loss on the mound.

CCHS will play Isabella at 4 p.m. Tuesday, and Jemison will play Thorsby at 7 p.m.

Thorsby is 7-1 on the season and could pose another hurdle for Chilton County.