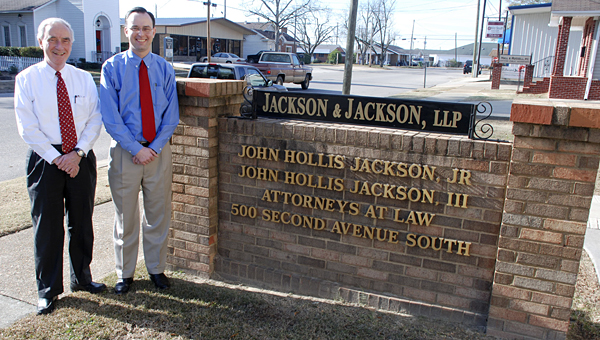 John Hollis Jackson didn’t grow up necessarily planning to be a lawyer.

“I think it was one of the interests I had at the time,” said Jackson. “I decided to apply and was admitted.”

For his son, Hollis Jackson, the legal profession is something he has been around since birth.

“This is a family business, which I was always around growing up,” said Hollis. “I would come here in the afternoon after school and do odd jobs.”

Together, Jackson and Jackson, LLP, represents the government of Chilton County and all four municipalities in it: Clanton, Jemison, Thorsby and Maplesville.

The elder Jackson decided to return to his hometown in the early 1970s, after completing an undergraduate degree from the University of Alabama, a two-year stint in the Army and UA’s School of Law.

Jackson has represented the county for more than 30 years and moved into his current office on Second Avenue South in 1975.

Hollis said his father inspired him to become a lawyer.

After completing degrees at Southern Methodist University near Dallas and Faulkner University’s Jones School of Law, the younger Jackson said there was never any question about where he would practice law.

In addition to representing local governments and the Chilton County Board of Education, the Jacksons also do a fair amount of probate and real estate law.

However, their work with municipalities takes a good portion of their time — and requires them to be on call 24/7. They help with day-to-day problems, paperwork and all sorts of other things that pop up.

“All these people have to deal with an incredible amount of red tape,” said John Hollis Jackson.

Over the years, the law firm has worked with many, many different leaders, but the elder Jackson said they all had one thing in common.

“I don’t think I’ve ever worked with a public official who wasn’t dedicated to the task,” said Jackson.

Hollis said technology has changed significantly, too. He contrasts having to go to the probate office and check hand-written deeds done in days past to how everything is done on computers today.

“The county has grown so much,” said John Hollis Jackson. “The technology has helped us tremendously.”

Despite being on call around the clock, the Jacksons say they try to keep work and family separate — they’re not talking about cases and files around the Thanksgiving table.

“That’s usually not in our discussion (at home),” said Hollis. “We like to leave it at the door when we leave.”

John Hollis Jackson said his firm’s work with local governments sometimes makes it more visible in the community, but that Chilton County has a great legal community, which deserves credit for the work it does.

“I think we have a good bar here and do things to help people every day,” said John Hollis Jackson.

Main Street Cafe in Clanton sees a busy lunch crowd every weekday. The restaurant business is not for everyone. Actually,... read more