Tractor-trailer threat shuts down I-65 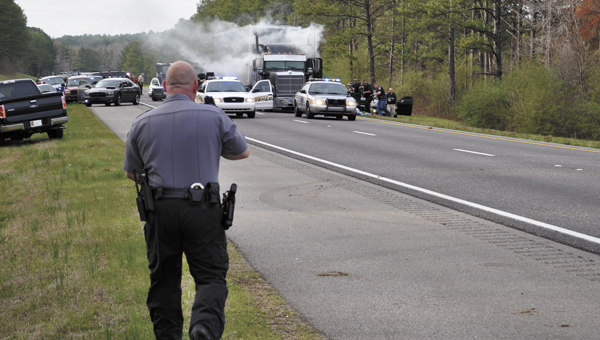 An incident involving a tractor-trailer driver threatening suicide and leading police on a brief chase closed Interstate 65 for part of Monday afternoon.

At approximately 2:30 p.m., a revenue enforcement officer pulled over a tractor-trailer for an invalid decal near the 196-mile marker of Interstate 65 South. The driver refused to roll down his window or comply with the officer’s other demands, Stilwell said.

The officer noticed the man was bleeding from his wrists, Stilwell said. The man also threatened to commit suicide, according to Davis.

Deputies from the Chilton County Sheriff’s Office and Alabama State Troopers tried to get the man to come out of his vehicle over CB radio.

He ended up driving off again, continuing southbound at approximately 45 miles per hour. He told officers over the radio that he would pull off I-65 and stop at Pine Level, or Exit 186, Stilwell said.

When he didn’t stop at Pine Level, officers deployed spike strips. A Clanton officer also shot out one of the truck’s tires, Stilwell said.

The truck continued to mile-marker 183, where it stopped. After a brief standoff, the Chilton County Sheriff’s Department tactical  team locked the trailer bed down and shot tear gas into the truck’s cab. The driver exited the vehicle and was taken into custody, according to Davis.

The driver was transported by ambulance to Baptist Medical Center South in Montgomery, troopers said.

Officers had closed both lanes of the Interstate from Exit 205 in Clanton into Autauga County.

The truck driver’s name has not been released as of Monday evening. The Alabama Department of Revenue will be the agency to bring charges in the case, Davis said.

Tigers, Panthers off to fast starts

Back in time: Jemison’s Trahe Smith, right, dives back to first base during Jemison’s win over Verbena. Craig Headley and... read more