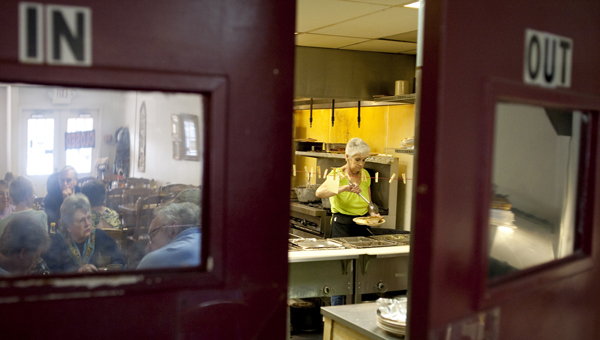 Gunay Clay, owner of Cattleman’s Steak House in Clanton, estimates 90 out of 100 people that show interest in serving food can’t handle the rigors associated with the job: remembering the requests of several tables worth of customers, working with the kitchen staff to get orders out as quickly as possible, and handling complaints as they arise.

“Anybody can handle a table or two,” Clay said. “But you can’t make money or make a career waiting on two tables at a time. The stress level gets real high if you want to make money, and it takes handling 30-40 tables in a short time to make some money.”

As is common practice in the industry, rookie servers spend their first few days following around a seasoned co-worker. That’s enough for some to decide they should look elsewhere for employment; others at least make it long enough to begin working on their own.

But it’s clear that most servers don’t last long; Clay said he’s read the average expectancy for a server to remain at a restaurant is 42 days.

And serving is just one aspect of running a restaurant. There’s also cooking the food, ordering the ingredients and marketing.

“It’s a totally different breed of business, the hardest in the world. I don’t wish anybody to get in the restaurant business—for the simple reason of all the items you have to buy, all the ingredients you have to put together to make a hamburger.”

Gore and her father, Larry, bought the restaurant that is now Main Street Café seven years ago with the plan of running the establishment together.

Larry found out the business wasn’t for him and went back to his former job outside the food industry. Nickki, though she had never worked in a restaurant before, loved the experience and has no plans to give up her restaurant anytime soon.

“I loved cooking at home; I grew up cooking,” Gore said, “but I never knew what hard work it was running a restaurant. When you go in and eat in a restaurant, you don’t realize what work is behind it.”

Gore is the manager, but she performs every duty required to run such an establishment, right down to washing the dishes.

Gore brought some recipes to Main Street Café, but others are courtesy of a longtime employee, Louise White, who worked in the location for more than 40 years when it was Strength’s Country Café and even before then. That’s her tomato and okra gumbo on the menu, as is the chicken and dressing.

“I couldn’t have done it without her,” Gore said about White, who is retired now and living in Verbena. “I’m blessed. Almost everybody that works here worked for the previous owner.

“They feel like part of the family. I try to treat them as I would want to be treated.”

Holding onto longtime employees, at least for two local eateries, is the only way to avoid the resources wasted in training new servers who usually don’t last.

“The way I see it, you spend a lot of time and money training somebody,” Clay said. “If you don’t keep them, you wasted your money and you trained them for your competitors.”