A resident of Coosa County, Mr. Eugene Victor Carter was born in Michigan on June 19, 1929.

Mr. Carter became a Southerner by way of Hoover as the caretaker of the Children’s Fresh Air Farm for 38 years. 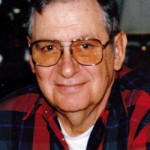 A master carpenter and an avid fisherman, Gene was fondly known for his cheerful greeting, “yell-o.”

Retirement to Lake Jordan gave him more time to spend with his beloved wife of 43 years, Jean, and bird, Elvis.

He is preceded in death by his son, David Carter.