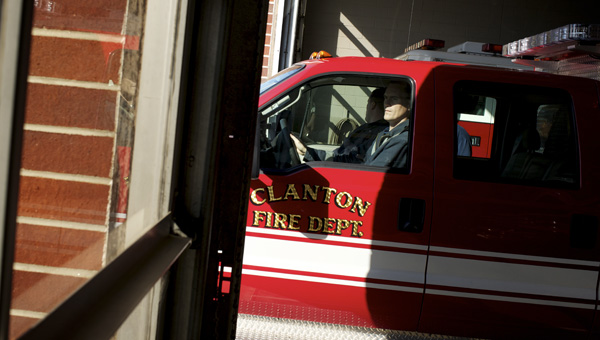 Clanton Fire Chief David Driver and his volunteer department crew responded to 1,430 calls in 2010, ranging from fires and car accidents to medical calls.

Sitting in his office at Clanton Fire Station No. 1, Fire Chief David Driver hears a sharp ring, letting him know a dispatch call is about to be relayed.

A few seconds later, a voice comes over the loudspeakers, letting him know about the call.

It’s always a tense moment, because firefighters never know what to expect. 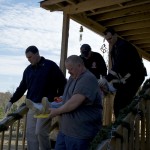 Driver (left) and other firefighters carry a women complaining of neck pains after surgery to a waiting ambulance.

In worst cases, firefighters are responding to house fires and bad car accidents. In lighter moments, it’s small grass fires or, even as clichéd as it sounds, a cat stuck in a tree.

Most of the time, however, Clanton Fire and Rescue responds to medical calls. That too varies greatly, from heart attacks, strokes and drug overdoses to less serious problems.

It’s just impossible to know what to anticipate, Driver said. Sometimes even with information from dispatch, calls can prove to be a big surprise.

A wreck in October seemed normal until firefighters arrived on the scene.

“We get dispatched ‘for a wreck,’ (which turns out to be) a propane truck on its side in front of Chilton County High School,” Driver said. “That’s a big difference.”

It takes a special person to be able to handle chaos and unpredictability and keep his or her composure and remain levelheaded. It’s especially hard when someone has died.

“We sometimes go on calls when there’s a loss of life,” Driver said. “It’s hard, especially children. I’ve got two children of my own.”

Firefighters have to find a way to deal with these tense situations, Driver said.

“You can’t dwell on it; if you did, you’ll never answer another call again,” he said.

Driver is Clanton’s only full-time firefighter. The department has a few people who help on a part-time basis during weekdays, but it is otherwise a volunteer crew.

When not responding to calls, Driver and the part-time squad work around the station or town. They must test hydrants and keep the department’s trucks and other equipment in tiptop condition. They check inventory, do business inspections and prefire plans and teach fire prevention in the community. They also try to do some type of training daily.

During rescue calls, the department depends on its dedicated volunteers, which number about 20. Volunteers carry a pager at all times and take turns handling medical calls overnight.

Clanton’s firefighters vary in age from their early 20s to mid-60s, with a good number in their 30s and 40s. Four of them are career firefighters with full-time departments outside Chilton County.

Many of them are self-employed; others work jobs with understanding employers who allow them to answer calls as needed.

Anyone above the age of 19 can be a firefighter in Clanton. An EMT basic license and volunteer firefighter certification are also required; firefighters must also live within two miles or work within the city limits and pass a physical and medical test.

Driver comes from a family of firefighters and started as a volunteer at age 19 and says he can’t imagine doing anything else.

Bargains are out there if you look

Touch of the Past antique store offers items of interest both for the collector and the bargain hunter. Many Chilton... read more