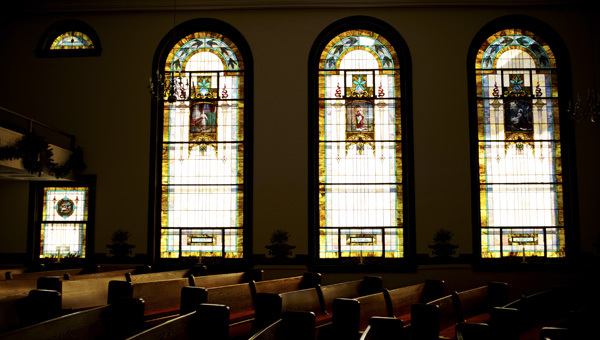 The stained glass windows at Clanton First United Methodist Church were recently determined to be “irreplaceable” by one insurance estimate. The windows depict various scenes from the life of Christ, including 12-year-old Jesus visiting the temple courts and Jesus praying in the garden of Gethsemane.

From the outside, Clanton’s First United Methodist Church is visually appealing, built in a classical revival style with handsome white columns and intricately designed stained-glass windows.

But to truly appreciate the resplendence of its sanctuary, one must view it from the inside.

According to church records, a Methodist society has existed in Clanton since the early 1870s, originally meeting in a local schoolhouse on Second Avenue. In 1873, the church paid $1 to purchase the land on which the current building now stands, temporarily meeting in a tent on the property until a permanent structure could be built. 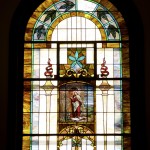 Each stained-glass window holds a plaque engraved with the name or names of those who donated the funding for each one.

The small, white, one-story frame building was used until 1887, when growth prompted the building of a second structure. The simple church in which the Methodists had worshipped for four years was purchased and moved to a different location, clearing the property for the building of a larger church.

Dedicated in May 1888, this larger building, still one story, boasted a steeple and bell tower. According to a compilation of the church’s history written by the late Helen Parrish, who served as church secretary for many years, the bell housed in the tower produced “the clearest, sweetest sound ever heard in Clanton,” and the children of the church took great delight in helping the pastor ring the bell each Sunday morning.

Two pot-bellied stoves provided heat during the winter months, and a pedal organ gave music for the services. In her compilation, Parrish writes about the ladies of the church who “vied with one another to see who could wear the fanciest hats to the choir” and the commotion that ensued when a bat flew in through an open window during the evening service, landing in the “large be-ribboned hat” of the preacher’s wife.

She notes that summer revival services with singing and dinner on the grounds were held on property belonging to the church located several miles outside of town on Enterprise Road. “Hell-fire and brimstone” sermons lasting two or more hours were delivered by visiting preachers, and services often lasted an entire weekend.

It was in the early 1920s that the church, led by the Rev. C.C. Wilkerson, decided to demolish its building and erect the ornate church that now stands on the property. Going from a simple one-room church to a large brick structure built in the classical revival style was no small undertaking, and it was expensive.

Architect W.S. Smith was hired to design the impressive new church envisioned by the congregation and its pastor. In her notes, Parrish writes enthusiastically about the fundraising efforts, which were not without controversy, “Pledges for the financing of the new church were raised in the one the most thrilling campaigns ever seen by the people of Clanton! “

The well-known Evangelist Bob Jones was brought to town for a three-day series of sermons designed to raise pledges. For these three days he was paid $300, an amount thought by many to be extremely large for such a short series of preaching.

However, the fiery messages of Bob Jones paid off. At the end of the three days, the people had pledged $50,000 toward the building of the new church. An additional $13,500 was borrowed from the bank, and the work was underway. Additional funding was provided through bake sales, ice cream socials and barbecues.

When the old church was torn down, its cherished bell was donated to the A.M.E. church of West End. Church members, now without a building in which to meet, gathered for services in the courthouse during the construction of their new church.

Neighborhood children provided a sentimental gesture, each bringing a jar of mementos, the contents of which were spread on the ground of the basement floor just before the concrete was poured.

The Methodists saw their new church completed in 1923. It housed 11 Sunday School rooms, a study for the pastor, and a large fellowship hall complete with a kitchen and sanctuary that could seat 500 people.

The congregation must have stood in awe when first viewing the interior of their new church, a site to behold given the simplicity of their previous building. The dark-stained wooden prayer rail and its richly detailed white plaster ceiling, more prevalent in European architectural designs, serve to enhance the impressive leaded stained-glass windows adorning the sanctuary.

Each window is designed to reflect a different biblical scene. Little information about the windows exists, but it is believed they were made locally. Each window holds a plaque engraved with the name or names of those who donated the funding for each one. A recent insurance estimate for replacing the windows, should one or more become damaged, determined the windows to be irreplaceable.

The origin of stained-glass windows is unknown, but they were seen in the 10th century churches of France, Germany and England. While beautiful, the windows also served another purpose. Centuries ago, when the majority of the population was illiterate and the Bible had not yet been translated into English or put into mass production by the Gutenberg press, these intricately designed works of art illustrated the story of Christ for those who could not read. As Europe came out of the Dark Ages and the Bible was made available to the common population, stained-glass windows, because of their beauty, remained popular aids to worship.

The windows in Clanton’s First United Methodist Church contain various depictions of the life of Christ. Among them, the 12 year-old Jesus in the temple courts; The Good Shepherd; Jesus knocking on a door, symbolic of Christ knocking at the door of our heart; and Jesus praying in the Garden of Gethsemane. The small, half-round windows at each corner of the sanctuary are likened to the All-Seeing Eye of God.

Belle Malmede, a church member and wife of an accomplished artist, envisioned something more for the sanctuary ­— something beautiful, remarkable and impressive — additional works of art that would also lend themselves as aids of worship in the new church. It took her husband, artist C.V. Malmede, three months to complete the two trompe l’oeil murals, which grace either side of the altar.

Trompe L’oeil in French means “to fool the eye.” It is an illusionary style of painting, dating to around 50 B.C., that depicts objects as three-dimensional.

The painting to the right of the altar is of Jesus with Mary Magdalene after his resurrection. On the left, he is talking with the woman at the well. Each scene appears to be surrounded by an ornately gilded frame, an illusion attributed to the trompe l’oeil style.

The only expense incurred by the church for this detailed work was Malmede’s room and board at a local hotel.

Eighty-eight years have passed since the church was completed, and it remains one of the most beautiful in Chilton County, but a building, no matter how beautiful, does not constitute a church. People make up the church, and there is still life in this one.

According to Pastor Larry Anderson, the reason for the church’s growth is, “because we offer ministries that meet the needs of the 21st century – practical needs for the lives of people today.” In addition to the “vital traditional service (which is) held in a beautiful building,” the church also offers a contemporary service, called Hydrate; a Hispanic service; AWANAS; and Upward Basketball. Divorce care and the Dave Ramsey course on financial freedom have also been offered at the church.