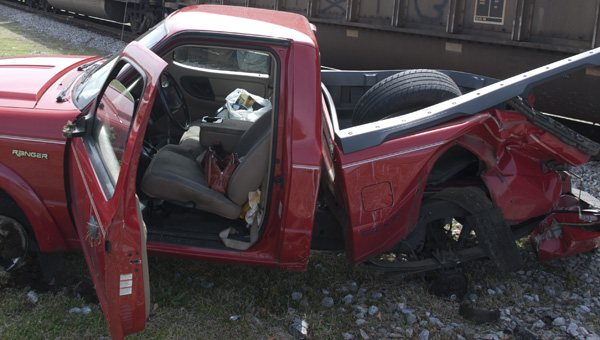 A pick-up truck and train collided Wednesday in Thorsby.

A pick-up truck and train collided Wednesday in Thorsby.

The accident occurred around 11:30 a.m. at the intersection of Franklin Street and U.S. 31.

The truck’s sole occupant, identified as Toni Imler of Grady, escaped major injury, and was on the scene Wednesday as crews worked the accident.

“Somebody is looking out for me,” she said, adding she never heard or saw the train, which continued down the tracks for another 2,815 feet after the collision.

Thorsby Police Chief Rodney Barnett said there were conflicting reports about what happened and whether the truck was in motion or not.
Barnett said the train company recently replaced stop signs at the tracks with yield signs.

“Everyone’s not yielding the right-of-way,” he said. “People get lax.”

Barnett said everyone needs to remember to stop, look and listen when crossing railroad tracks.

A state project to install guardrails at the Franklin Street intersection, as well as several others across town, has been repeatedly delayed.