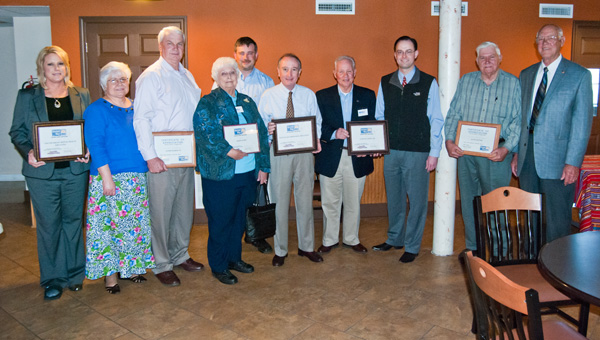 Chilton County United Way held an appreciation luncheon Tuesday for people and groups that have contributed to its fundraising effort.

Chilton County United Way recognized many of its sponsors at an appreciation luncheon Tuesday at Clanton First United Methodist Church.

“It’s a big number that has helped,” United Way Board Chairman Curtis Smith said. “If it wasn’t for them, we wouldn’t be able to reach the people we do.”

Smith estimated United Way is 90 percent to its goal of $200,000 and said the group would continue working toward the goal.

“It’s been a rough year for us, but our board has worked tirelessly, and people have given as they could,” Smith said. “We certainly appreciate everybody’s help.”

Smith stressed that United Way tries to keep administrative costs low—there are only two paid employees—and that about 75 percent of the group’s donations go to children.

Lloyd Nutter and Kenneth Moates were presented appreciation certificates for helping the organization.