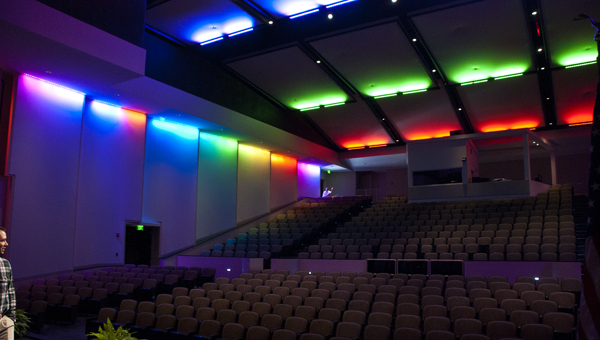 Jefferson State Community College and the city of Clanton held a “ribbon tying” ceremony Tuesday for the grand opening of the Economic Development Center. 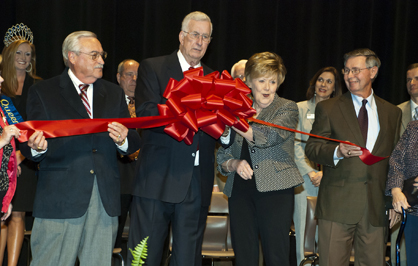 Local civic and business leaders, as well as Chilton County residents, gathered in the EDC’s performance hall to celebrate the new facility and everyone who played a role in its development.

“It wouldn’t have happened without the help of a lot of people,” said Clanton Mayor Billy Joe Driver. “It’s a grand day for the people of Clanton.”

Merritt recognized numerous people, thanking them for being instrumental in making the project a success, including Mike Robertson, executive director of the Chilton County Chamber of Commerce; Elmer Harris, president and CEO of Alabama Power; and Wayne McKinnon.

“I want to give a great big Chilton County welcome and an added thanks to the city council and to the college for coming here to our community,” Robertson said.

During Harris’ address to the crowd, he presented Merritt with an additional $10,000 for a book scholarship for local students that he assisted with previously.

“The sound and lighting is mind-blowing,” said Stevens. “Theatrical performances, concerts and anything else you can think of can be held here. If anyone wants to have anything here, please call me.”

After the tying of the ribbon, tours were given of the facility.

The EDC is equipped with 60–inch monitors in its three training rooms, a 13,000 square-foot exhibit hall, a kitchen, loading docks, male and female dressing rooms equipped with vanity lights and monitors that are focused on the stage. It also has a green room with a monitor in it as well and ticket windows located both upstairs and downstairs.

Chilton County United Way held an appreciation luncheon Tuesday for people and groups that have contributed to its fundraising effort.... read more