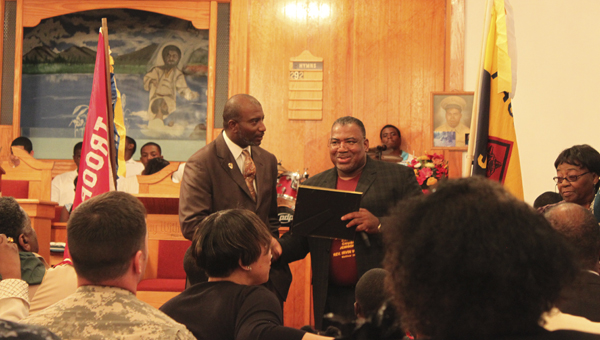 In addition to holding an annual program, the Jemison church retains a wall holding more than 500 names of current and retired military men and women.

“We just want to stop and say thank you to the families that stay behind and keep things going while we’re deployed,” Elvin Thompson said. The brothers are graduates of Montevallo High School.

Elvin, who retired from the U.S. Army as a 1st Sergeant after 22 years of service, drove from his home in Augusta, Ga., to serve as the service’s keynote speaker.

“Freedom is not free,” Williams said. “These men stood the line and paid the price. We just want to pause for a moment to say thank you. It’s a sacrifice to serve, but we don’t regret it.”

Williams said he doesn’t want this country’s citizens to worry about suicide bombers or explosions, and he was proud to serve the country in order to prevent that type of fear.

“When we signed up, we were told that we have to go out, but we don’t have to come back,” Williams said. “We’re just a little church on the side of the road, but we just want to say thank you.”

Ethel Atchison, the Thompsons’ mother and the church’s youth director, moved from Montevallo when she remarried.

“The least we can do is say thanks,” said Ethel Atchison, the Thompsons’ mother and the church’s youth director. “The least you can do is come to a program such as this to thank them.”

Firefighters work to control a fire Saturday that destroyed a building at Taylor-Made Transportation that is used to dry wood.... read more