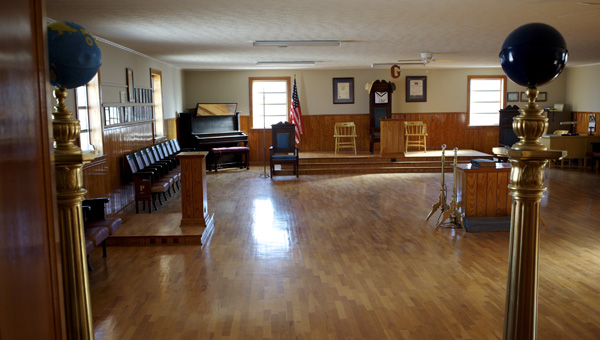 Masons won’t talk about the meaning of the many and curious symbols in their lodges. Shown above is Jemison’s Masonic Lodge.

There are many things Freemasons won’t tell non-members about their fraternity.

The meaning behind the abundance of symbols in a lodge, for example, is a secret revealed only to Masons. But aspects of the group’s activities are also rarely revealed to the public, though one might wonder why.

Chilton County’s two Masonic lodges, in Clanton and Jemison, are active in the community, giving to charity and helping families in need. 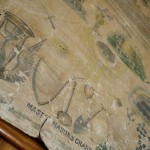 The meaning behind the abundance of symbols in a lodge is a secret revealed only to Masons.

Masons also help individual families, Clanton lodge treasurer Danny Carter said, but those families usually have no idea where the assistance is coming from.

Masons might also pool their talents and resources to build wheelchair ramps for the elderly in the community.

“That’s why most people get in,” Carter said of Masons’ willingness to help others, even if without recognition. “Masonry is about taking a good man and making him better.”

To raise money, Clanton Masons hold four cookouts a year: at Thanksgiving, Christmas, the Fourth of July and Labor Day.

The Jemison Lodge raises money through cookouts and also through a pancake breakfast every January, said Worshipful Master Zachary Ashley.

Jemison Masons combined with two Shelby County lodges in 2010 to raise more than $2,000 to buy toys and games for Christmas to take to patients at Children’s Hospital in Birmingham. Ashley said this was the first time members of the Stanley Cost Lodge had participated in such an effort.

“We typically pick a family in the community that needs some help,” Ashley said. “They get referred by a member or by someone else. Maybe someone’s house burns, and there’s a church group raising money to donate and we’ll help with that.

“In most cases, the person receiving help doesn’t even know. Most of our charitable work is done anonymously.”

In fact, Ashley said the Masons are probably most visible in the community when they are performing funeral rites for a member that has passed. Ashley said the person’s family must request the rites be performed.

“That’s probably where people see us the most,” he said. “We’ve actually earned members that way.”

Gaining membership is another example of how Masons don’t market themselves.

The Jemison lodge has about 75 members, and about 90 people belong to the Clanton lodge.

Ashley said anyone interested in the group should visit the lodge 30 minutes or so before regularly scheduled meetings, which take place on the second and fourth Thursdays of every month at 7:30 p.m.

Anyone who decides to join would have an avenue opened for donating to the community—and may learn more about the Masons’ many other secrets.

“You meet very few people that don’t know a Mason,” Ashley said. “They may not know what we do, but they know that grandpa was a Mason and they have an idea that we do charitable work in the community.

“But it’s behind the scenes; it’s not done for any kind of recognition.”

The Verbena team huddles during a game this season against Jemison. Verbena gets the ball and rushes down the court.... read more