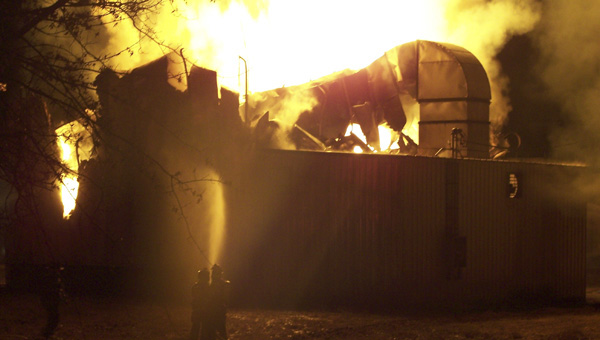 Firefighters work to control a fire Saturday that destroyed a building at Taylor-Made Transportation that is used to dry wood. (CONTRIBUTED PHOTO)

A fire destroyed a building Saturday night at Taylor-Made Transportation, Inc. in Maplesville.

The fire, which occurred around 6 p.m., consumed a kiln used to dry lumber. Mike Reynolds with Taylor-Made said over 100,000 board feet of lumber was housed in the facility. Nobody was injured in the fire.

Reynolds said as of Monday he had no idea about how the fire started. Maplesville Mayor Aubrey Latham said a preliminary investigation has ruled the fire as accidental.

Latham said firefighters battled the blaze for five to six hours. Wood from the building was smoldering Sunday afternoon.

“When we got on the scene, the fire was already coming through the roof,” Latham said.

Maplesville Fire Department, along with firefighters from South Chilton, Isabella, West Chilton, Fairview and Cedar Grove departments, responded to the blaze. Care Ambulance was also on the scene.

Masons won’t talk about the meaning of the many and curious symbols in their lodges. Shown above is Jemison’s Masonic... read more