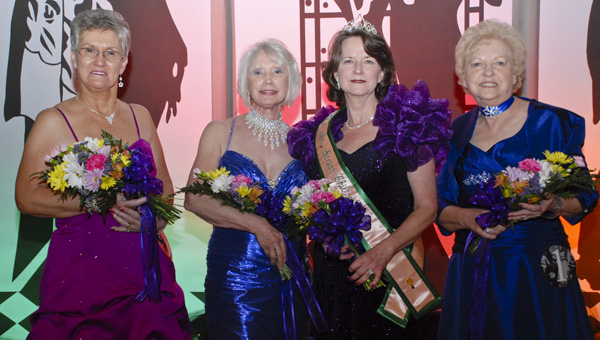 The theme for this year’s Ms. Senior Chilton County Pageant was “Strike a Pose,” and six contestants did just that as they graced the staged Friday night at Thorsby High School.

The pageant, now in its 10th year, began with an opening number to Madonna’s Vogue, followed by the talent, evening gown and philosophy portions of the night.

After the contestants expressed their philosophies on life, contestant No. 6, Reba Tucker of Randolph, was crowned the 2011 Ms. Senior Chilton County Queen.

“It’s unbelievable; I was so surprised they said No. 6 – it’s me, I’m No. 6,” said Tucker. “I made my own dress and enjoyed being in the pageant. I just want to let it be known that there is a lot of potential for the age of elegance.”

Contestant No. 2, Nancy Jones of Jemison, took home the awards for Ms. Congeniality and “The Spirit of Chilton County” award for raising the most money.

“I’m very pleased with the pageant’s turnout. I just wanted the women to enjoy being in it,” said Pageant Director Wes Gandy. “As long as they had fun. It’s a lot of work, but the sponsors were phenomenal. I couldn’t have done it alone; it takes good support from the community.”

Truett Maddox delivers a sermon one Sunday morning at the Chilton County Jail. Much of the sunlight that escapes into... read more