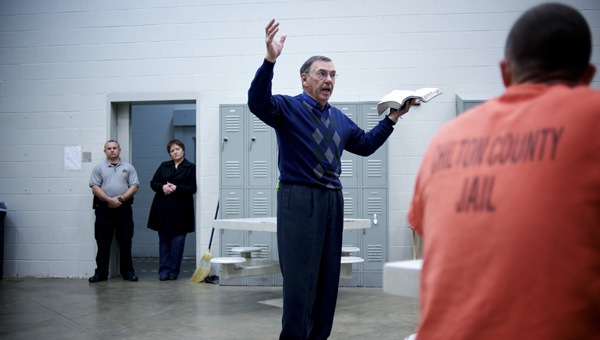 Truett Maddox delivers a sermon one Sunday morning at the Chilton County Jail.

Much of the sunlight that escapes into the Chilton County Jail seeps through narrow, tinted windows just big enough to provide a glimpse at the weather. But the kind of light Truett Maddox is trying to shine doesn’t come from an outside source.

Since 2004, Maddox has volunteered in the Chilton Baptist Association’s men’s jail ministry, going to the jail most Sunday mornings to deliver a scripturally-based message and words of hope to inmates. At age 75, Maddox describes himself not as a minister but as a layperson who felt the call to become involved in a specific ministry.

As Maddox enters a pod (the jail is divided into several sections called pods), he begins to speak with only a Bible and a pair of glasses to aid him. 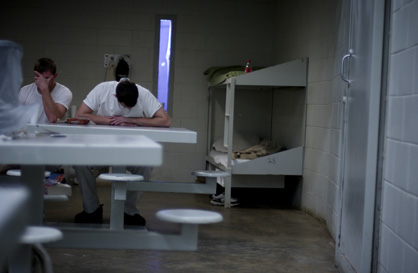 inmates at the Chilton County Jail bow their heads as Truett Maddox leads them in a prayer.

There is no pulpit to stand behind or platform from which to speak. Some of the men sit attentively at tables, while others on the upper level lean over the railing with their Bibles open, and still others listen from their bunks. Some carry on as if no one were there.

“There may be a time when you’re out there facing something and you don’t have a Bible with you, but if you memorize it, you’ll have it with you,” Maddox tells the men, encouraging them to memorize one verse a month.

“I carry it with me when I’m out in the cold feeding the cows,” he continues.

On this particular Sunday morning, the message comes from Acts chapters 16 and 17, in which Paul and Silas are praying and singing hymns in their prison cell. As told in the passage, an earthquake causes the prison’s doors to fly open and the prisoners’ chains to come loose.

Maddox reminds the men that despite their isolation from society, God is always near and concerned about their hearts and souls.

“What is our main goal or main purpose?” he asks.

After the sermon, Maddox invites anyone to share a testimony, or story relating some personal experience, with the rest of the group. No one answers at first. After a few seconds, a man walks up and says, “I have a testimony.”

Forlando Floyd shares that he has been separated from his teenage daughter for a long time. His mother, however, recently gave him hope that she (his daughter) would be returning home soon.

“That’s a blessing,” Floyd says. “In the midst of all my mess, that God is working for me.”

Floyd goes on to say that Maddox has been “an inspiration” to him.

“He was always a good leader and a good teacher, someone you could count on,” he says. “He has always had an uplifting spirit.”

“I love you guys,” Maddox says after his sermon, and several echo his words.

Perhaps the reason Maddox has remained in prison ministry for so long is because he looks past the label of “inmate” and sees a real person with a real need. He takes what he believes to be a message of hope into one of the last places someone would ever want to go, and he does it voluntarily.

“I don’t try to pry into their personal lives or their past,” Maddox said.

Maddox has been astonished at the works of art he has seen in jail. Some inmates use ink fillers to draw because they are not allowed to have pens, which can be used as weapons. 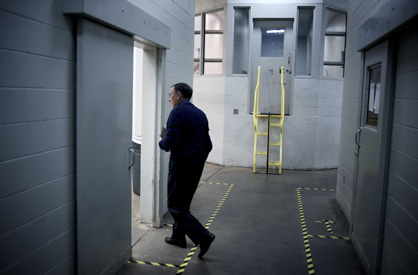 Maddox enters a pod, Bible in hand, from the central corridor. Despite some inmates who don’t want to hear his message, the minister said he has never felt threatened by an inmate.

“Some of them are artists. They have a talent that’s unreal,” he said, recalling when one inmate drew him a rose. “Sometimes they make their own decks of cards.”

Inmates also write to Maddox. While some ask for money, others write about how the ministry has encouraged them.

In turn, Maddox has been encouraged by inmates who have turned their lives around.

“They were a big encouragement to me because of the life they were living then, and, of course, I felt the Lord calling me to this ministry and saw the need. They needed someone to show concern and compassion for them,” he said.

Maddox, who is also a Gideon, gives inmates copies of Gideon Bibles and copies of a special Bible called “Free on the Inside.” He also passes out “commitment cards” that ask for basic information, church preference and type of commitment (such as the decision to become a Christian).

One might think that a person would be uneasy preaching to a congregation of men in orange and white jumpsuits, especially when there are those who don’t wish to hear the message. But it doesn’t seem to bother Maddox.

“At no time have I ever felt threatened by an inmate,” he said.

What seems to trouble him the most is the fact that, often, there is no way to follow up with inmates when they get out of jail.

“A lot of them don’t have families,” he said. “I’ve had instances when they’ve said, ‘I could get out, but I don’t have any place to go.’”

But there is one thing that keeps Maddox motivated: his own faith.

“I think back of what Christ did for me. That’s my motivation,” he said.