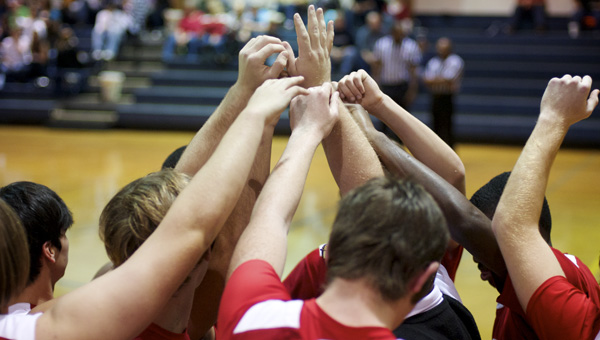 The Verbena team huddles during a game this season against Jemison.

Verbena gets the ball and rushes down the court. A few quick dribbles and the ball is passed to No. 23 Fred Wright.

The junior guard stands behind the three-point arc, shoots and scores — nothing but net. 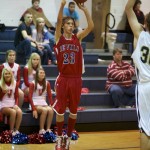 Fred Wright shoots a three-pointer earlier this season against Jemison, in a game the Red Devils lost. Wright was born with an underdeveloped right hand.

A minute later, the ball is passed back to Wright. With adrenaline pumping and in the exact spot as before, he releases the ball and scores again, making two three-point baskets in the last 120 seconds of the game.

It’s clutch play, with pressure that would get to any athlete. But Fred Wright isn’t any athlete.

Standing 6 feet tall with brown hair and a lanky frame, Wright defies the odds. He was born with an underdeveloped right hand, but he has never let it slow him down.

“He’s a great kid, his personality is awesome and he never complains about anything,” said Coach Jonathan Shedd, who’s been basketball coach at Verbena for three years. “Fred hustles all the time, and anything I need done he does it and gives everything he’s got when he is on the court.”

Wright became part of the Red Devils’ basketball team his sophomore year. The biggest challenge on the court for him was learning how to play and how to keep from fouling.

“When I first started last year (2009), I really didn’t know how to play,” said Wright. “Another player’s dad asked me to try out, so I did. I believe in not letting things get in my way and doing things the best I can.”

Wright not only applies this belief on the court, but off the court as well.

He is a straight ‘A’ student who works just as hard academically as he does outside of the classroom.

Another hurdle Wright conquers on the court is facing his opponents after they’ve learned he plays with one hand.

“After finding out, the team will go at him on his right side,” said Shedd. “But when he sees that, he’s quick enough to get away from them or he gives up the ball. He is very smart about knowing what he can and cannot do.”

He wouldn’t call himself an athlete, but Wright, who has had a passion for sports all of his life, also played wide receiver and cornerback for Verbena High School’s football team his freshman year. He is a sprinter on the track team, runs cross-country and also enjoys golf and bowling.

“He has loved sports ever since he was in diapers,” said Stroud. “I have a picture of him when he was a little boy standing up in front of the TV with his hands in the air in field goal position.”

Because it was something he was born with, Wright said having one hand doesn’t bother him or isn’t even something he thinks about. 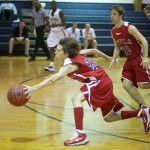 “I don’t find it too hard to do things because I was born this way and have been this way all my life,” said Wright. “I’m used to it.”

It’s normal to his teammates as well.

“Fred is just a good person,” said Marquez Deramus, Wright’s teammate. “He’s fun, has a good personality and, like coach said, he never complains. He’s a good dude. Nobody ever talks bad about him or anything.”

Off the court, Wright is described as a friendly, easily likeable person and “goofy” at times.

Still, people know Wright as an ambitious person who does not let anything or anyone discourage him.

During the first game of the season, against Isabella, he went up to get a rebound, fell back and injured his head and had to receive five stitches.

“As he was leaving the game, he turned around and looked at me and said, ‘I’ll see you tomorrow, coach,’” Shedd said.

He also split open his chin during the second game this season against Billingsley.

“While he was sitting down, I asked him, ‘Fred, are you OK?’ He responded, ‘Yes, I’m waiting on you to put me back in,’” said Shedd. “He doesn’t care. Whatever happens, he takes it in stride.”

In spite of his situation and the adversities he has come across, he holds his head up high and doesn’t let the way he was born hinder him – what you see isn’t what you get when referring to Frederick Wright.

“I believe you should always do your best,” Wright said. “My motto is if you do good, good things will happen to you.”

Truett Maddox delivers a sermon one Sunday morning at the Chilton County Jail. Much of the sunlight that escapes into... read more