Sharonda Cooper has been the star of the Thorsby girls basketball team since her seventh grade year.

So, it might seem strange that Cooper felt more pressure this past season, her junior year, but coach Ab Argent said his point guard had to shoulder an even heavier burden than before. 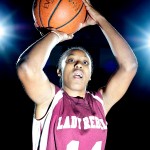 “Sharonda had to do a little more,” Argent said. “People have caught on to Sharonda; they know what she can do. People’s whole game plan is to stop Sharonda and make other people beat them.

“I think Sharonda felt more pressure to have to perform this year.”

Cooper’s numbers at the end of the season looked like they have in years past—she averaged almost 20 points per game—but those points weren’t always easy to come by for The Clanton Advertiser’s Player of the Year for the second consecutive season.

Cooper was at her best when playing with a chip on her shoulder.

“I didn’t want to make it twice,” Cooper said. “Just because Isabella is like a rivalry game, there was no way we could lose to them again.”

And Cooper and her teammates were eager to avenge a loss in the championship game of last year’s Chilton County Tournament—their first of the 2009-10 campaign. The Rebels played some of their best basketball and won this year’s tournament.

Cooper settling into a role happened about the same time as teammate and good friend, Amanda Hubbard, making her presence felt.

Hubbard was a senior and perhaps realizing her career was coming to a close.

“She wanted to go out with a bang,” Cooper said. “It’s going to be a lot different without her out there next year.”

But Cooper and Hubbard will still likely meet up on Sundays at “Thorsby court,” the tennis courts turned into basketball arena by the old Thorsby school. It was there that the two players forged their bond.

With Hubbard gone, Cooper next season will likely assume even more of the spotlight. She should be used to it by now.

“She stepped her game up a notch,” Argent said. “The thing is, she still has a chance to get better.”