Brooks, the featured speaker at CCHS’s Black History Month program, told a story about when he was in school and poor decisions could have led to a different life. 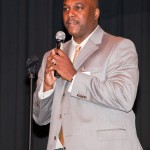 He went to a party with some older friends, ran from the police with them after they got into a fight at the party and later—after being found and searched by police—discovered that marijuana was hidden in a friend’s jacket he was wearing.

“My dad would have killed me,” Brooks said, and he wasn’t joking. “That was the day I decided I was going to think for myself and not let other people dictate what was going to happen to me.”

The story illustrated the “thinking” portion of Brooks’ speech.

On talking, Brooks stressed the importance of being positive and supporting others. He told another story, about when a bus carrying Brooks’ travel basketball squad overturned and his coach was killed.

Randy Fuller, Brooks’ high school coach, was waiting with Brooks’ parents when the player arrived back in Birmingham.

“I really made sure that I worked hard for him,” Brooks said before touching on his other three points.

On learning: “You have to challenge yourself every day to learn as much as you can.”

On giving: “The greatest thing you can do is give.”

On living: “This life is so short. Those other things let us live a better life.”

Brooks, who is middle school coordinator with Shelby County Schools, was preceded in the program by CCHS teachers Joselyn Quinn, who read Maya Angelou’s poem “Still I Rise,” and Angela Wilson, who quoted John Donne’s “Meditation 17”: “No man is an island, entire of itself; every man is a piece of the continent, a part of the main.”

CCHS student Jalise Taylor sang the Gospel hymn “His Eye is on the Sparrow.”