Grantland Karn shined for the Chilton County basketball team this season despite a difficult set of circumstances.

Karn had been a scoring threat for two varsity seasons—and his whole career, dating back to church league basketball at age 5—but had yet to be counted on as a go-to player for CCHS. 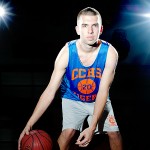 Complicating matters was that Karn’s longtime coach, Donnie Hand, resigned after Karn’s junior season, meaning what was supposed to be Karn’s best year would be one of transition to new coach Cain Young.

Still, Karn averaged a team-best 18 points and eight rebounds per game in leading the Tigers to 11 wins and their ninth consecutive county tournament title—and was named The Clanton Advertiser’s Boys Basketball Player of the Year.

As a junior and sophomore, Karn was a complimentary player to stars like Taylor Hughes, last season’s Player of the Year.

But with those players gone and Karn a senior, he was forced to step into a leading role.

“I don’t think there’s any doubt when you’re pressed into that role when you’ve never done it before that it’s not an easy thing to do,” Young said.

Karn relied on help from some of the team’s other seniors: Joe Looney, Montel Wilkes, Quincy Underwood and Nelson Williams—especially Williams, who has been the point guard to Karn’s wing player since the two were in fourth grade playing church league basketball for Clanton First Baptist.

“It helped with our chemistry a lot,” Karn said. “We just know what each other’s moves are.

“I felt like I had to perform each and every game as a senior.”

But learning how to play Class 5A varsity basketball was an adjustment.

“I think just playing all those games, playing with people that were bigger, stronger and faster helped me compete at that level,” Karn said. “It made me play harder than I usually would.”

Karn also had to adjust to a coaching change.

The Tigers under Young ran more set plays than under Hand.

“We’re always just going to try to play to our strengths and maximize our potential,” Young said. “We made it a point to try to run things just for him in certain situations.

“He was probably our best pure shooter on the team.”

Sharonda Cooper has been the star of the Thorsby girls basketball team since her seventh grade year. So, it might... read more