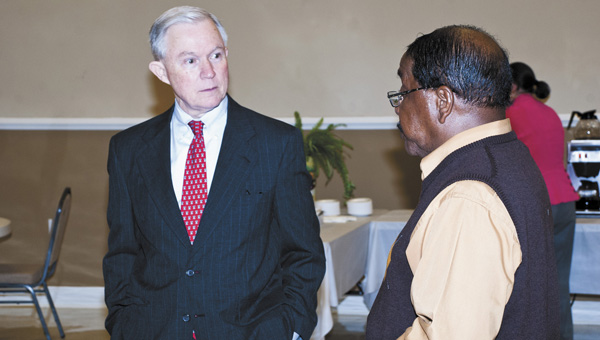 “If more people did things like this, it would shock them how much money they could save,” Sessions said to Jemison Mayor Eddie Reed.

Jemison High Principal Alan Thompson told Sessions his students were able to save $5,000 by moving their prom from Prattville to the complex.

After the tour, Sessions spoke on a variety of topics with local leaders, including Reed, State Rep. Kurt Wallace and Thorsby Mayor Dearl Hilyer.

A good portion of the hour-long conversation focused on the economy and rising energy prices.

Sessions said Jemison and Chilton County are in a prime spot — halfway between Birmingham and Montgomery — for future growth.

“You just have an advantage when you are on the main transportation system,” Sessions said.

Wallace told Sessions he thought “many people would rather live here than in Birmingham,” but he worries what effect gas prices have on residents or businesses who might relocate to Chilton County.

“We need to produce more oil and gas here,” said Sessions. “We could produce a lot more and that could help us.”

Sessions said oil rigs are moving to other countries because they can’t get permits to drill off American shores.

Other topics of conversation included how Jemison and Thorsby were doing with sales tax revenues, unemployment and inflation.

Sessions said wages aren’t keeping up with inflation and that jobless numbers are actually higher than they look because many people have come off unemployment or have simply stopped looking for work.

“Food, milk and cotton prices have doubled. Consumption drives our economy. How can you expect any real growth in consumption (with so high unemployment)?” Sessions said.