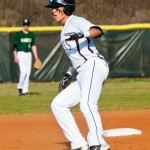 Put on the brakes: Thorsby’s Matt Morgan rounds second base after hitting a double during the Rebels’ 11-0 win over Shades Mountain Christian on Thursday. Morgan finished with two hits, a walk, two RBI and two runs scored.

The win improves Thorsby’s record to 3-0 on the season.

Beam faced 13 batters, one over the minimum number, in his time on the mound and struck out four Eagles.

Bo Hoffman relieved Beam for one scoreless inning and struck out one batter.

Hoffman also went 2-for-3 at the plate with a double, a run batted in and a run scored.